When I met Tom Beach Alter

It was an exciting moment for me to meet in real life a person whom I have watched in different roles on the big and small screens as a police officer, a thug, a man of the cloth, a slick diplomat, a tea planter and variety of British colonials. His roles in film, theatre and television have made him familiar to millions of moviegoers who follow Bollywood in India and across the border. He is the one and only Tom Beach Alter.

Born in 1950 to an American missionary family in Mussourie, India, he may look like a gora, an American visitor, but Tom is a proud Indian who speaks Urdu with a pure Lucknawi accent. His Indian roots reach back to the turn of the century, when his missionary grandparents traveled from Ohio to preach, convert and teach in that part of the Punjab that is now in Pakistan.

We were both among the speakers at a seminar on “The Role of Media in promoting Peace and Prosperity” in New Delhi, organised by the Jashn-e-Adab at the India International Centre recently.

In his speech – delivered in Urdu/Hindustani – Tom Alter endorsed what I had said about the need for peace between the two countries. He added that Aman ki Asha is a positive initiative for both India and Pakistan and strongly demanded the revival of cricketing ties between India and Pakistan. He emphasised that both countries should play cricket on their home grounds instead of playing in neutral places.

He attended the mushaira held later, proving to be a good listener. He appreciated my poem with the words, “Hum to aap ke zakhmi darakhton ki shaakhon se jhool rahe hein.” 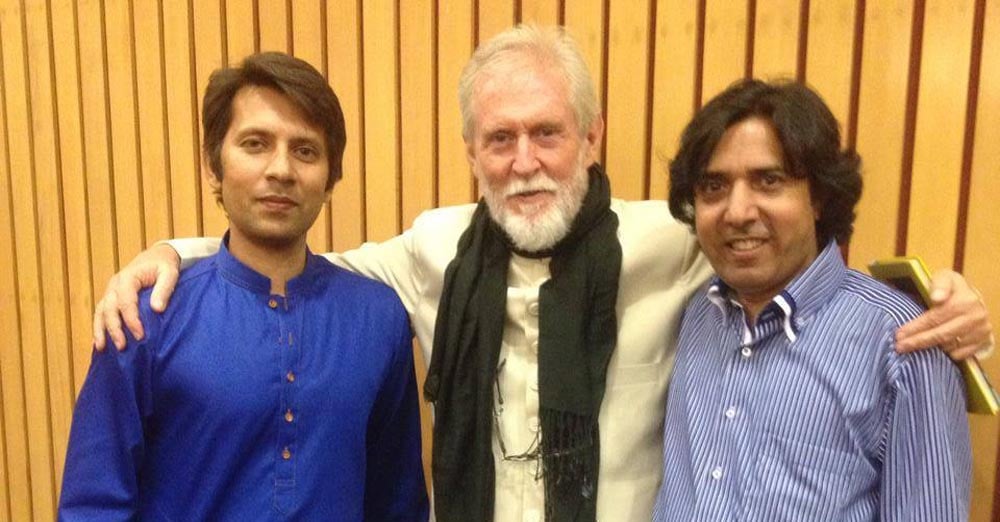 At the reception after the seminar when someone offered him a drink, he refused with smile saying, “I am a pukka Musalman and pukka Hindustani”

It was good to sit together and chat later with this amazingly straightforward, down to earth, multi-faceted man. He told me that his father was born in Sialkot, and also became a missionary. He settled in Mussourie, northern India in 1945 with his wife. Their three children, including Tom, attended the famous Woodstock School there. Many of the other students were also Americans, children of missionary parents, diplomats, business executives and other expats living in India.

“I was brought up in Mussoorie, Rajpur and Dehra Dun, and it was heaven – blessed — truly — my family, my school, and my home,” he said softly, when I asked about his childhood.

I learnt that besides being an actor, playwright and director, Tom Alter is also a sportsman and a philosopher. “I have written three books: one on cricket and two novels and all three are about myself,” he told me.

After graduating from Yale University, when he returned to India seeking a career in the film industry, he renounced his American passport. Some of his friends thought he was mad.

“Even the embassy thought I was crazy, but they finally agreed”. He added that it was a difficult decision but one that was inevitable. ”You have to be truly committed to your homeland, otherwise you don’t get respect or acceptability.”

It was while working as a teacher in a small town that he got hooked into watching Indian films, and was inspired to switch careers and go into acting thanks to Rajesh Khanna’s performances. In 1972, he joined the Film Institute in Pune, where Naseeruddin Shah was a year junior to him. In 1978, they, along with Benjamin Gilani co-founded the Motley Productions theatre group that Shah now runs.

“My father was not a person to share nostalgia – but I know he loved the land in which he was born and grew up – which was neither India or Pakistan, but Hindustan,” he said when asked about his father and Sialkot. “He chose to live in India after freedom but his heart was always in the Hindustan where he grew up and as far as people go, for me there is no border, never will be”.

Tom is a firm believer of brotherhood between India and Pakistan. “Since we are brothers, it can often be difficult to be good friends, but we must aim for that”.

About the visa situation between the two countries, he said that people “should be allowed to freely travel to whichever city they want to visit, the visa should be for the whole county not restricted to specific cities. There should be no police reporting at all.”

He is clearly proud of his father, who is buried in Mumbai – “and not as a citizen of a particular country”. His tombstone says he was “born in Sialkot, died in Connecticut and buried in Mumbai”.

Tom Alter himself has never been to Sialkot but he visited Karachi in 1988 “when my older saala-sahib and his wife were working at the American school – my visit was full of nostalgia and mazaa and every day I felt right at home.”

Going there on a police-reporting visa on his Indian passport, he recalls his visit to a police station to report his entry in Karachi. “A constable recognized me and shouted, ‘look, Tom is here!’ I was received as a guest, offered tea and the officer in charge said, ‘Sir, why did you take this trouble, you should have called us, we would have come to where you were staying’.”

When I asked him what he thought about the Indian cinema, he responded that Indian cinema was overall on the right track. “The strong point is that now we are using original and challenging stories”.

What about Pakistani cinema? “I know very little about the Pakistani film industry but two films which I have seen, Khamosh Pani, and Khudaa ke Liye, were brilliant, and influenced me deeply,” he replied.

He said films should be a narrative of contemporary times. It is such factual films that Pakistan will be recognised through, “not by Achha Gujar type films”.

Our discussion took place just before the formation of a new Indian government. “A Modi sarkar is being formed, and the future is fascinating,” he said, adding, “but I firmly believe that religion, any religion, should not be the basis for a country’s existence.”

Stephen King reveals one movie he ‘walks out of as adult’