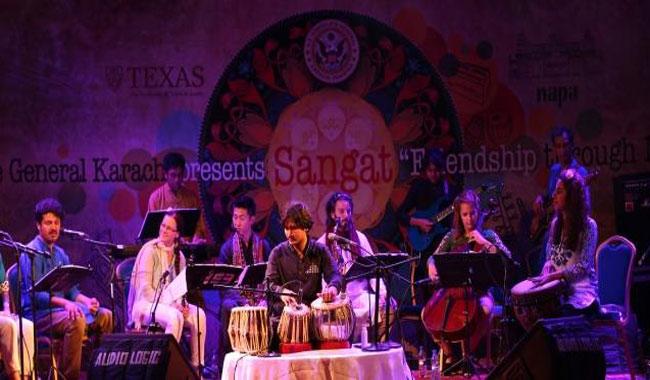 KARACHI: US Consulate Karachi organized a concert featuring ‘Sangat’ – an ensemble of musicians from the University of Texas (UT) Austin and National Academy of Performing Arts (NAPA).

The concert showcased the success of a three-year university partnership between the two schools, supported by a Rs. 100 million U.S. government grant. Kamran Ali, Director of the South Asia Institute at UT and Arshad Mehmood, NAPA’s Director of Programs, also attended.

“The university partnership highlights our efforts to develop musical talent in Pakistan, while building people-to-people ties between our two nations,” said Consul General Heath. “This performance shows the power of music and culture to bring people together.”

The U.S. Mission to Pakistan has 20 university partnerships in Pakistan, said Consul General Heath. “In Sindh alone, we have sponsored four over the past three years and, as with the UT-NAPA partnership, each is a Rs. 100 million grant.”

“Our partnerships are just one part of the work we are doing to support higher education in Pakistan,” said Mr. Heath. “We know that a nation’s youth is its future, and we want to ensure that Pakistani students have access to the tools they need to fully realize their potential and to contribute to a strong, stable, and prosperous Pakistan.”

While in Karachi, the UT musicians will participate in a panel discussion on women in music, hold workshops and faculty meetings.

The partnership between NAPA and UT Austin, which began in 2013, is a three-year grant totaling nearly $1 million. The grant promotes ties between UT’s Butler School of Music and NAPA’s music program. The aim is to help Pakistanis with music composition, music theory, orchestration, piano, voice, string instruments, and conducting. It also promotes ties between music instructors and faculty at UT and NAPA.