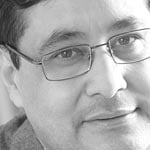 Aitizaz Hasan, Chaudhry Aslam, me and you

The writer has taught international relations and public policy at Boston University and the Fletcher School of Law and Diplomacy and was the vice chancellor of LUMS.
On Monday, a child died in Hangu. He died a hero’s death. He died for a cause greater than himself, showing great courage and immense conviction. In a society where even the government sometimes seems to be not fighting back, this child fought back. He stood up. That is the stuff heroes are made of.
Let us not forget, however, that he was but a child. Yes, he gave his life to save the lives of others. But let us remember that his life was taken away from him. Snatched brutally. Needlessly. Ruthlessly. Barbarically. Yes, he was a hero. But he was also a victim.
Let us also remember that he was a Pakistani. He is dead precisely because he was a Pakistani. Martyred, yes. But, before that, murdered by those who make a sport of killing Pakistanis.
Let us not forget who he was: Aitizaz Hasan, resident of village Ibrahimzai, a Pakistani, a hero, a victim, a student, a child.
Fifteen-year olds should not be in the business of dying in ghastly encounters with self-righteous lunatics in suicide jackets. Fifteen-year olds should not be in the business of saving their school and their class-mates from horrendous death by themselves dying horrendously. As we salute Aitizaz Hasan’s courage and bravery let us also remember that 15-year olds should not be in the business of dying a hero’s death. The only business a 15-year old should be in is to live a child’s life: a little mischief, a lot of innocence, maybe some frolic on the side.
It was the action of a suicide bomber that took Aitizaz Hasan’s life on that frigid morning in Ibrahimzai, Hangu. But it was the inaction of an entire society, an entire a polity, that robbed him of his childhood. This is not just a story about what Aitizaz Hasan did that morning. It is also a story about all that we as a society have not been doing: on

providing security to our citizens, on fighting terrorism, on combating extremism, and indeed on education itself. Aitizaz’s death is a reflection of our failures. Shame on us! All of us!

* * * * *
Three days later, on the Lyari Expressway in Karachi, Pakistan’s most feared and, maybe, most respected policeman was killed. He had led a ruthless life. He met a ruthless death. The central character of so many ‘encounters’ was himself ‘encountered.’ His death should not have surprised anyone. Yet it left the entire metropolis and the entire country shocked.
Quite literally, stunned: “If the ‘iron man’ of Pakistan police was not safe, then who was?” we all asked ourselves. In life he had been called many things; most often ‘controversial.’ In death, there was just one word that everyone has used: Hero.
And a hero he is. He is a hero, not for the way he died. But for the way he lived: by standing up. No one seems to have any doubts about his flaws; his rough edges. But the outpouring of admiration has bordered on the reverential. In a society whose biggest sin is inaction, it should not be a surprise that a ‘man of action’ emerges a saint.
Chaudhry Aslam is a hero like no other in Pakistan today because he did something that no one else seems willing or able to do: to do something. He stood up. Just as that child in Hangu would later do, Chaudhry Aslam had lived having decided that he had to do something, even if it was something reckless. There is a message in the ‘herodom’ of Chaudhry Aslam that is greater even than Chaudhry Aslam. It is that Pakistan and Pakistanis crave action against terrorism. One only hopes that the message gets across to policymakers.
Yes, Chaudhry Aslam’s story is a story of sacrifice, but it is also a story of murder. His story is not simply about yet another gruesome attack on a Pakistani. It is the story of yet another gruesome attack on a symbol of the Pakistani state. If the attack on Aitizaz Hasan and his school was another attack on Pakistan’s future, the attack on Chaudhry Aslam was an attack on a central apparatus of Pakistan’s statehood. The question you and I confront is one we have confronted before: If this is not war, then what is? If you are not on the side of Pakistan in this war, then whose side are you on?

* * * * *
There is so much – way too much – to reflect on in the angst of this week. Let me offer just three thoughts.
First, a thought about ‘herodom’: Pity the people whose heroes die young. Pity the nation where one has to die to become a hero. In a society at peace with itself neither Aitizaz Hasan nor Chaudhry Aslam should have had to die to become a hero. There is so much more that they could have done had they lived. Herodom has robbed one of his childhood and another of his parenthood. There can be no greater tragedy than that.
Second, a thought on what Aitizaz Hasan was defending, and what his killers sought to attack: schools. Terrorists clearly see schools – and education – as one of the biggest threats to their agenda of extremist hatred. Such a great threat that a child, Malala Yousafzai, had to risk death and another, Aitizaz Hasan, had to embrace it. Yet, in a strangely perverse way they may understand the power of education much more than we do. What they seek to destroy so violently, we have done very little to build.
I wonder what the school in Ibrahimzai that Aitizaz gave his life defending actually looks and feels like? If it is like so many other government schools in so much of the rest of Pakistan, it is likely to be a picture of neglect. It is not just ironic but disgusting to realise that what our enemies choose not to ignore, we continue to neglect.
Finally, a thought on the Chaudhry Aslam’s we choose to ignore; indeed, we often lampoon: Pakistani policemen everywhere. Most policemen are not as fascinating and charismatic as Chaudhry Aslam was. Indeed, some may be individually incompetent, corrupt or have succumbed to an inept system. But the fact is that most Pakistani policemen are chronically under-resourced, over-stressed and under-appreciated; stuck in one hell of a tough job; which the generally do with amazing grace, obvious courage and often with bravery.
The Pakistani policeman is, really, the frontline in Pakistan’s war against terror. Very often they are the only thing standing between a suicide bomber and his would-be victim. On chowki after chowki, check post after check post, Pakistani policemen are putting their lives on the line for your safety, and mine.
The mayhem of this week should remind us that the Pakistani policeman deserves a little more respect than he gets. Maybe an occasional gesture of appreciation instead of the scorn and sarcasm we usually reserve for them. Here is one small act that will not take much but could go a long way: next time you see a Pakistani policeman doing his duty, stop, smile, and simply say: ‘Thank You.’
Twitter: @adilnajam