With new VC at the helm, winds of change start blowing at NED University

The oft-quoted adage on power and the consequential responsibility fits well for Prof Sarosh Hashmat Lodi, the recently appointed vice-chancellor of the NED University.

When he took the helm of the city’s top-ranked engineering university on March 22, faculty members anticipated a much-needed change in the varsity’s academic and research culture, their hopes based largely on Lodi’s 29-year affiliation with the university and his close friendship with Sindh Chief Minister Syed Murad Ali Shah.

“From being a lecturer to the dean of the civil engineering department, his [Lodi’s] long-standing relationship with NED makes him a perfect choice for the position,” said Muhammad Nabeel, a graduate of the varsity’s electrical department and a visiting faculty member.

“His [Lodi’s] real test begins now,” said Nabeel. “The VC has to increase the proportion of project-based learning – that is the only way to bridge the widening gap between the skills taught at the university and the skills required by the industry.”

Nabeel, who has a Master’s degree in robotics from the Korea University of Technology & Education in South Korea, called for launching teacher-training programmes and introducing digital facilities for students.

“It is gutting when the finest engineering talent of the city is compelled to study topics such as 3D modelling on outdated whiteboards. It is also equally distressing when teachers flat out refuse to incorporate videos and animations in their lecture material; their persistent aversion to digitisation is baffling, as it is costing our students dearly.” 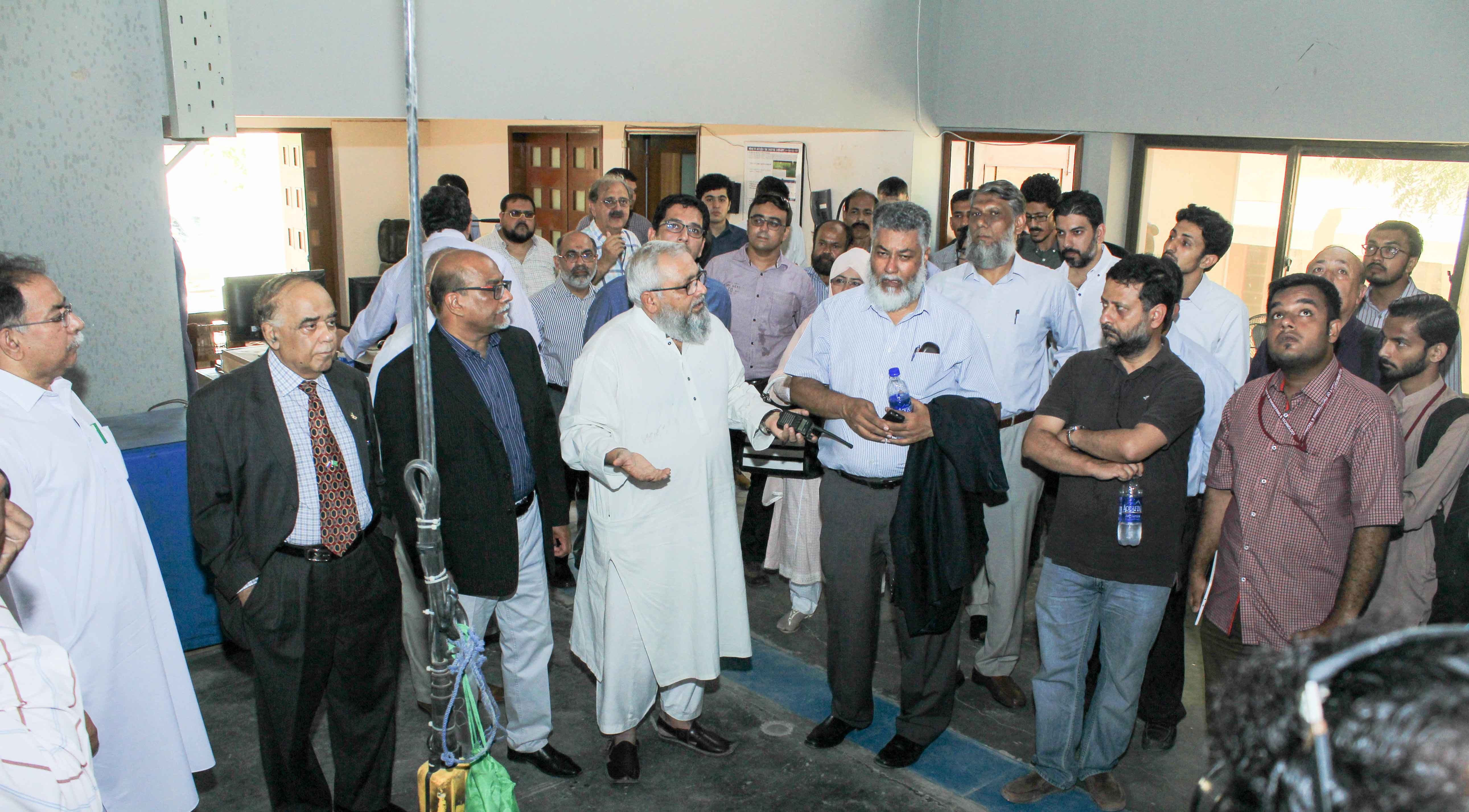 The new VC, being quite tech savvy himself, realises the need to embrace technology. “For NED and its students to stand out in what will only become a more competitive environment, a change in the existing teaching culture is a must,” said Lodi. “This is the age of virtual reality and we are light years behind. So, our plan to upgrade lecture halls and set up state-of-the-art labs has to be a top priority.”

Former dean of civil and architecture departments, Lodi said the varsity’s first virtual reality centre was being established in the civil department and it would help students prepare for the industrial requirements. “Teachers will also be trained as per the modern educational environment.”

The new VC has also planned to install big LCD screens as an alternative to conventional notice boards that seldom grab the students’ attention. “While the need of conventional wisdom remains important, it’s necessary to cater to the needs of the tech savvy students who want to grow and learn in a high-tech environment,” said Lodi, who has a Master’s degree in structures from the Oregon State University in the US and a PhD from the Heriot-Watt University in the UK.

Unlike his predecessor Prof Dr Afzal Haque, the new VC is believed to be as powerful as the university’s longest-serving VC, Engr Abul Kalam. Faculty members opined that Lodi’s bureaucratic relationships could prove fruitful for the university.

“Kalam sahib managed to get funds for the university during his first three tenures,” said a senior teacher. “He was more focused on opening new departments and carrying out infrastructural development.”

The teacher regretted that there was a suppressive environment for dissent in the university during Kalam’s 16-year administration. “The intellect of teachers and students is the real asset of a university. Without guaranteeing intellectual freedom, no progress can be achieved.”

The teacher hoped that the new VC would focus on spending on human development. “Without paying reasonable salaries to the teachers, it’s unfair to expect them to spend time on research work and acquiring innovative skills. Teachers are compelled to look for a second job due to the economic challenges.”

However, the new VC, who worked in close coordination with Kalam and was the varsity’s registrar from 2005 to 2006, looked calm as he shared his vision for administration. “I respect dissent, but I’ll not compromise on maintaining discipline.”

Lodi said his immediate goal was to encourage a culture of research at the university, for which he would formulate a plan to introduce special incentives for the teachers. “I’ve ordered the quality management cell to appropriately gather and present the research work being conducted at the university. We’ll now properly take part in the HEC ranking as the NED University has all the potential to stand out in the ranking system.”

While Kalam was successful in maintaining a high standard of academic discipline, his last tenure ended up leaving the NED University in the middle of a financial crunch, as the university had taken out loans from commercial banks. The reason behind this, according to high-ranking officials, was Kalam’s stand against political recruitments and “his courage to say no to wrongful orders”.

“But there were reports of misappropriate use of funds during his last tenure, as he had loosened his grip on the administration due to his old age,” a senior official said.

The official regretted that the university was gradually overloaded with non-teaching staff despite Kalam’s resistance. “He [Kalam] was compelled to take out loans from commercial banks after the university was denied its due share by the government. There was no other way to meet the varsity’s growing expenses.”

Kalam’s successor, former VC Haque, inherited an acute financial crisis when he assumed charge on March 18, 2013. Though he dubbed himself a “toothless administrator”, he managed to help the varsity sail through the financial crisis.

“In 2013 the university had a whopping Rs1.56 billion of liabilities with a share of Rs765 million to pay off the private bank loans taken in the past for the employees’ salaries. Additionally, it had an annual deficit of Rs522 million for 2012-13,” said Haque’s report published a few days before his retirement.

“With financial support from the Sindh government and the HEC, and savings through strict cost-cutting measures, a major portion of this liability has been paid off with its current volume reduced to Rs427 million and the annual deficit to Rs72 million as of June 2016. With rigorous efforts, the university paid off all its bank loans in mid-2014.”

Amid the acute monetary crunch in 2013, Lodi had arranged a meeting between Haque and the then Sindh finance minister Syed Murad Ali Shah, who graduated with Lodi in civil engineering from the NED University in 1985.

Shah had helped the university receive its due right with getting approval for a grant of Rs350 million in June 2013. The varsity received Rs400 million more as soon as the next fiscal year began in July.

Another friendship story at the NED University that appears to be successful is that of Kanza Batool Haider and Hiba Latifee, who started their entrepreneurial project ‘Cycle Yaari’ in 2015 after facing a host of hurdles.

“To catch up my classes in the chemical department, I used to ride my bicycle that I had put in the varsity’s parking lot,” said Kanza, who originally came up with the idea to offer students a paid cycle service.

With Hiba joining her cause, the duo gathered more students to turn the idea into an entrepreneurial business plan.

“We charge a nominal amount since the motive is to make the service affordable for both male and female students,” said Kanza, who is working as a technology venture analyst in the varsity’s research and innovation centre.

Her friend Hiba recalled that some of their fellow students and teachers found it awkward that “girls were riding bicycles in the university”.

“We faced a lot of resistance at many levels. But we were committed to making it happen,” said Hiba, a graduate in computer engineering.

Once a group of Hiba’s staunch critics gathered around her as she entered the campus on a cold morning, but she calmly mounted on her bicycle, hit the paddles and passed through the haze, and all those who tried their best to frustrate the duo’s passion of creating an environment where girls could freely exercise their right to ride bicycles.

“The current CM and VC should not let the university fail. They should formulate a long-term plan that could ensure progress in the years to come,” said a senior professor who taught Kanza and Hiba during their graduation.