Got it!
JK
James Kirkup

Most Tories don’t want to go to war over Europe

Some Downing Street aides these days resemble British riflemen at Rorke’s Drift, crouched behind makeshift barricades and waiting for an assault by massed ranks of Conservative Eurosceptics driven to fury over the referendum and planning to overrun the leadership after the vote.

This fear helps explain why No 10 is prosecuting the referendum campaign with such aggression. Some of David Cameron’s team think mere victory is not enough: they must win in such a manner as to destroy those who oppose them, and thus render them unable to threaten the PM after the vote. The approach calls to mind Gore Vidal: “It is not enough to succeed. Others must fail.”

Given all that, it may come as news to some of the people who nominally run the Conservative Party that the party is not, in fact, at war over Europe.

That may also be a revelation to voters, who have been treated to the sight of senior Conservatives kicking lumps out of each other for weeks: 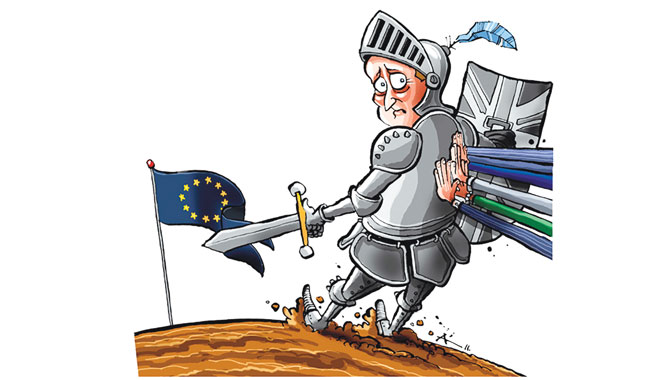 Cameron suggests Tories who back leave are unpatriotic, immoral and advocating a policy that would cheer terrorists and condemn Britain to penury; Brexit-backing Conservatives have accused the leadership of fear mongering, telling outright lies and spreading vicious rumours about the families of Leave campaigners.

Less obvious is the distinct absence of war between many people in the party, even though they take different sides. For all the spectacle of those high profile blue-on-blue attacks, the participants are relatively few, a minority of the party in Parliament.

The charming Sir Nicholas Soames MP may attract attention for telling a Brexit-minded colleague to “–––– off you ––––”, but Tories in the Commons tearoom do not, by and large, divide along Leave/Remain lines; old friendships endure. Old enmities too, of course.

Among the voluntary party – the shrunken grassroots membership that pays its dues, knocks on doors and hands out leaflets – passions run hot over Europe. But hot enough to split the party and topple a leader who won the first Tory majority in a generation?

Most of the people still paying £25 a year for the privilege of membership have put up with years of disdain from the Cameron leadership (remember “swivel-eyed loons”?) out of dogged devotion to the party. They are, in fact, a level-headed bunch, not the sort to go in for political psychodrama.

Besides, most Tories who were inclined to wage war on a high-handed leadership out of disappointment over Europe are long gone: membership is down to 150,000, barely half of what  Cameron inherited.

Many people view Tory disagreements over Europe through the lens of the internecine Maastricht battles of the 1990s, an experience seared into the memories of many Conservative participants. It’s notable that some of the most outspoken critics of  Cameron’s pro-EU tactics are former Maastricht rebels, men such as Iain Duncan Smith, Bernard Jenkin and Liam Fox.

One Tory who worked with  Cameron and  Osborne when they were young party aides in the 1990s says the Maastricht battle informs the leadership’s view of the party on Europe too: “They’re scarred by it, terrified of being lynched by the Eurosceptic mob, so they only way they can respond to the sceptics is to either bribe them or kill them.”

There are more recent echoes. Today’s referendum rows are also a reminder of the disagreements before and after  Cameron’s election as leader in 2005 (when he defeated rivals including Dr Fox). Yet even that spat feels like ancient history to many Tories.

While older hands dominate the public debate, it’s easy to overlook the fact that 221 of the 330 Conservative MPs were first elected in 2010 or 2015. Many of these MPs look at their older colleagues’ violent fixation on the European issue in despairing incomprehension.

One pro-Remain minister puts it thus: “My generation wasn’t around for Maastricht and all that – I was at school, for God’s sake – so we’re not Bill Cash obsessives about Europe. Yes, it’s important but it’s not the most important thing in the world, and certainly not something I’m going to go to war with colleagues about.” A pro-Leave minister, meanwhile, ranks the EU as “97 out of the top 100 issues in politics”.

Such people will find it rather easier to work together after the referendum than the pessimistic forecasts of civil war  might suggest. It remains entirely possible that post-referendum recriminations will propel  Cameron out of No 10 within days, but a slower departure seems more likely, even if his final years may be painful. With a working majority of just 17, it will not take many aggrieved Brexiteers to cause him real trouble.

Sooner or later though,  Cameron will go. Many Tories, and observers of the party, inevitably discuss the succession in terms of Europe.  Cameron, it is said, is gloomily convinced that a Brexit supporter will inevitably capture the hearts of the Tory faithful when he departs. Some of his supporters talk of a nightmare scenario in which Boris Johnson wins the leadership on a promise to hold another EU referendum after the 2020 general election.

Yet among Conservatives of the younger political generations, there is an appetite for a succession contest and a subsequent leadership that are about much more than Europe. Offering new Conservative answers on economic inequality, social mobility, technology and the changing nature of work may prove more important to such Tories than which side someone took in the referendum.  Anyone who can appeal to the quiet majority of Tories who are not much interested in European warfare will be a formidable contender for the leadership, and in a position to overcome even mighty referendum combatants such as  Johnson. The people to watch are the ones who are avoiding the European fray, ministers and even backbenchers who have refused to plunge into the referendum bloodbath, and thus remain unstained.

Cameron and his sceptic enemies will doubtless fight their historic wars for years to come, but the rest of the party is quietly preparing for the peace that will one day follow.