Migrants will be barred from entering Britain after a Brexit unless they can speak good English and have the right skills for a job.

Boris Johnson and Michael Gove have pledged as they set out their vision for the UK outside of the EU.

In a joint declaration, Johnson and Gove announce plans for an Australian-style points based immigration system to come into force in the years after Britain leaves the EU. 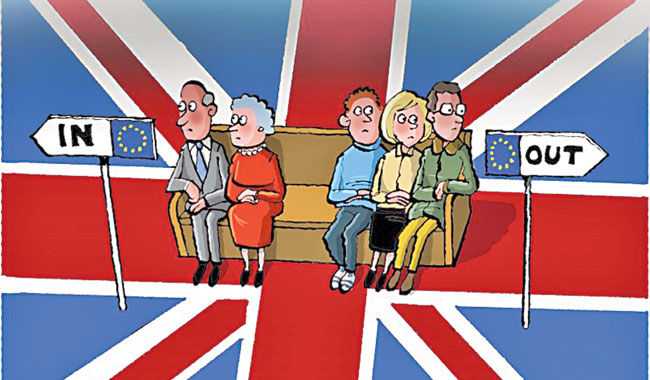 Their statement, which is also signed by employment minister Priti Patel, will infuriate Downing Street and represents a major challenge to David Cameron’s authority.

It will be seen as the first policy of a Eurosceptic manifesto that could be enacted after a Brexit and will bolster claims by Cameron’s critics that he cannot remain as Prime Minister until 2020 if Britain votes to leave the EU on June 23.

After a vote to leave the EU the “automatic right of all EU citizens to come to live and work in the UK will end”, Johnson and Gove say.

Under the Australian system, migrants are only granted skilled migration visas if they pass a points test based on what type of job they do, their age, English language skills, previous employment and education.

Their intervention comes just days after figures showed that net migration to the UK has risen to 330,000, the second highest level on record.

They warn that the scale of immigration is putting a “particular strain” on public services and that “class sizes will rise and waiting lists will lengthen” if Britain does not leave.

The pressure will intensify if Britain votes to remain, they warn, as EU migrants come to this country to escape rising unemployment in their home countries caused by the Euro-crisis.

It came as two polls showed that the Leave campaign has taken a lead with less than one month until the referendum.

Telephone and online surveys by pollsters ICM put the Brexit campaign ahead on 52 per cent, with Remain on 48 per cent of the vote.

Leave campaigners intend to focus in the weeks ahead of the referendum, believing that the issue can win them the vote.

The joint statement came as clashes between leading Conservatives intensified despite a pledge by the Prime Minister to debate the issues.

In an interview on BBC Two on Tuesday Johnson appeared to directly criticise David Cameron and George Osborne for being part of a “small group of people who do very well out of the current system”. He suggested that they favour staying in because it enables them to “go mwah mwah” with Christine Lagarde, the head of the IMF, at the Davos business summit in Switzerland.

The former Mayor of London compared Osborne’s warnings to “an avalanche of scaremongering, a sort of Himalayan snow job of statistics”.

Osborne in turn accused the remain campaign of “fantasy economics” and said that “ordinary workers” rather than leave campaigners would be hit by a Brexit.

In the joint statement, which is also signed by Labour MP Gisela Stuart, Johnson and Mr Gove say that a points system is the only way to “restore public trust in immigration policy”.

The leading Eurosceptics warn that “class sizes will rise and (NHS) waiting lists will lengthen if we don’t tackle free movement”.

“By the next general election, we will create a genuine Australian-style points based immigration system,” Johnson and Gove say.

“The automatic right of all EU citizens to come to live and work in the UK will end, as will EU control over vital aspects of our social security system.

“EU citizens will be subject to legislation made by those we elect in Westminster, not in Brussels. We could then create fairness between EU citizens and others, including those from Commonwealth countries.

“Those seeking entry for work or study should be admitted on the basis of their skills without discrimination on the ground of nationality. To gain the right to work, economic migrants will have to be suitable for the job in question.

“For relevant jobs, we will be able to ensure that all those who come have the ability to speak good English. Such a system can be much less bureaucratic and much simpler than the existing system for non-EU citizens.”

Johnson and Gove say that the new system will be “fairer, more humane, and better for the economy”.

“We will end discrimination against non-EU countries,” they say. “We will end our support for the EU’s disastrous policies that have encouraged the people-smugglers. “We will be able to manage immigration according to the needs of the economy with a new points based system. We will welcome new citizens who wish to contribute to our society, as so many immigrants have done. And we will be able to remove those who abuse our hospitality.”

Johnson and Gove make clear that their new rules will not affect Irish citizens or EU citizens “already lawfully resident in the UK”.

It came as two polls showed that the Leave campaign has taken a lead with less than one month until the referendum.

Telephone and online surveys by pollsters ICM put the Brexit campaign ahead on 52 per cent, with Remain on 48 per cent of the vote.

Johnson and Gove have in recent days started setting out their plans for the country in the event that Britain leaves the EU.

On Tuesday they pledged to scrap VAT on domestic gas and electricity. The policy would be paid for using the £11billion they claim Britain would save by not having to provide contributions to the European Commission. Johnson last night suggested that David Cameron and George Osborne are part of a “small group of people who do very well out of the current system”.

He told the BBC: “It is in a sense a struggle between people who want to take back control and a small group of people who do very well out of the current system and who are able, and who know Christine Lagarde and can go mwah mwah with her... at Davos or whatever it happens to be.”

Sajid Javid, the Business Secretary, on Tuesday accused Iain Duncan Smith of “playing the man not the ball” after claims that he privately backed a Brexit before coming out in favour of staying in the European Union.