Cameron’s EU gambit may yet prove his undoing

If the UK plumps for the exit door, we find ourselves in correspondingly much, much deeper trouble

The evil genius of David Cameron’s EU referendum ploy was summed up in a single sentence of his speech this week outlining the alleged threat to Britain’s national security from a vote for Brexit.

Cameron set out the conundrum facing voters as follows: “If you were buying a house or a car, you wouldn’t do it without insisting on seeing what was being offered, and making sure it wasn’t going to fall apart the moment you took possession of it.”

Indeed you wouldn’t, except that in the case of Cameron’s EU referendum, checking under the bonnet or commissioning a full structural survey of the implications of a Brexit vote is impossible - and designedly so. 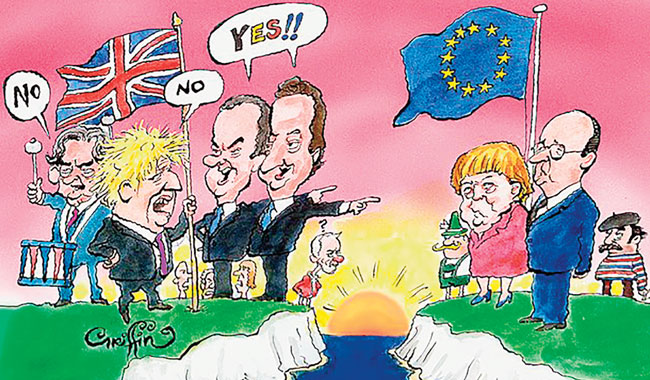 Unlike in last year’s Danish referendum over whether to accept more EU Justice and Home affairs legislation where voters were offered a meaningful (if complex) choice, in the UK vote we are explicitly not allowed to know what “Remain” means.

If Cameron had been serious about offering British voters a chance to leave, he would have spelled out and negotiated the options for a new relationship – the Norwegian umbilical cord, the Swiss-style free-trade deal or the completely free-range WTO option – stuck them on a ballot paper, and then let the people decide.

But as everyone knows, Cameron wasn’t serious. The EU referendum was never a popular demand of the British public – polls put the EU way down the list of voters’ concerns - but a narrow tactical move to prick the Ukip bubble and appease the Eurosceptic ideologues in his own party.

The clever part of that apparently brave decision is that, on closer inspection, the apparently fair-minded take-it-or-leave-it question on EU membership is nothing of the kind. In reality, it begs so many imponderables as to be unanswerable.

If the trick works - and the UK votes to remain - then Cameron will congratulate himself on an unfair fight, well won. But if it doesn’t… well, that as the Prime Minister knows, that is where the serious problems begin.

The uncertainty that underpins the EU referendum and Cameron’s strategy for winning the vote on June 23, is also its greatest flaw. If the UK plumps for the exit door, we find ourselves in correspondingly much, much deeper trouble.

In the event of a Brexit, we genuinely don’t know what happens, and nor do the financiers and bureaucrats responsible for keeping the world spinning on its axis. We don’t even know the basics, such as who stays on as PM, or whether Article 50 would be instantly triggered, or how Germany and France would react, or what would happen to Sterling... there are simply too many variable to make sound predictions on these questions. Which means that during this dispiritingly one-eyed campaign we also don’t know – can’t know – who is telling us the truth.

Will Cameron really trigger “Article 50” and open talks on departing the EU within days of a Brexit vote - as he told the House of Commons last month that he would - or is he just saying that to scare us?

For the Leave camp, will Cameron really be kept on as PM in the event of a Brexit - as leading outers are now contending - or are they just saying that to soothe the fears of wavering voters?

In essence, everything is true, until it is not. In the instant of Brexit, Britain slips through the Looking Glass into an unknown and uncertain world, which is exactly the way Cameron wants it, until it actually happens, when the impacts could be tumultuous indeed.

The risk for the Remain camp is that the voters feel angered rather than cowed by the Prime Minister’s carefully conceived electoral conceit, and express their ire at being offered a non-choice by rejecting it.

After all, that’s what the Danes did before Christmas; that’s what Trump’s America has done, and that’s what multiple electorates have done all across Europe – from Spain, to Ireland to Portugal and Croatia - since the financial crisis: tumult be damned.

Perhaps that’s the real reason why, as the polls tighten, as surveys show businesses warming to the idea of Brexit and the BBC 10 O’clock news implicitly ridicules the prime minister’s warnings of World War III with footage of Spitfires dog-fighting over the Channel, that Cameron could be seen at his lectern, visibly starting to sweat.