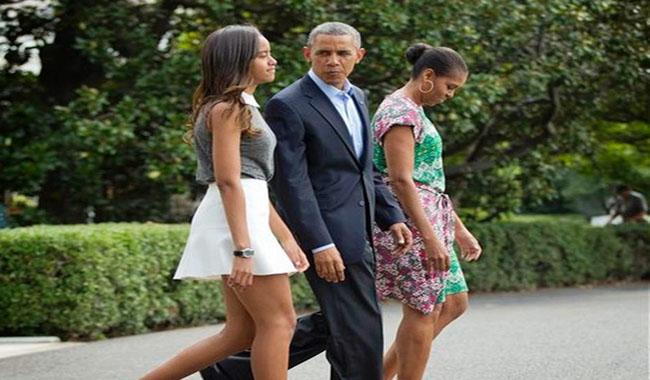 WASHINGTON: President Barack Obama wrapped up his final summer getaway to Martha´s Vineyard Sunday, gearing up for a busy final few months at the White House.

The president spent the morning getting in a final round of vacation golf under a near cloudless sky before rolling out in his motorcade with first lady Michelle Obama and daughters Sasha and Malia.

The Obamas traveled by the president´s plane Air Force One back to Washington late Sunday, landing at Andrews Air Force Base in Maryland at around 8 pm (0000 GMT) for the short helicopter flight via Marine One that would whisk him back to the White House in a matter of minutes.

The first family spent just over two weeks at their summer vacation house at the popular Massachusetts retreat, an island located south of Cape Cod.

The family dogs, Sunny and Bo, also indulged in the time off. This summer will likely be the last that the Obamas vacation with a huge entourage of press, secret service protection, aides, gawkers and hangers-on.

This time next year -- barring unforeseen circumstances -- either Hillary Clinton or Donald Trump will be in the White House, and the traveling sideshow that currently accompanies Obama will follow him or her around instead.

After a relaxing holiday spent golfing, going to the beach and tucking into a stack of page-turning books, the president is returning to a to-do list that includes overseeing flood recovery, tackling Zika virus and boosting Democratic presidential candidate Hillary Clinton.

Obama is scheduled to travel to Baton Rouge, Louisiana Tuesday to survey the damage from devastating floods in the region.

Some in the state had lamented that the president did not leave his vacation to meet with officials and flood victims earlier.

Obama did speak with Homeland Security Secretary Jeh Johnson -- who visited Louisiana last week -- from his vacation home to get an update on the situation.

The president will likely also continue urging Congress to release funds for the fight against Zika.

He asked Congress in February to allocate $1.9 billion to combat the spreading virus, but was met with resistance by Republican lawmakers who said the funds should instead be moved from coffers previously reserved for fighting the Ebola outbreak.

Next month, Obama will visit Laos -- a first for a US president -- in a trip that begins with a G20 summit in China.
The September 2-9 tour will be the president´s 11th visit to Asia since he took office in 2009.

Obama is also expected to hit the campaign trail for his potential successor Clinton. The president is at his highest approval rating in years and can still rally his party´s base, which could prove crucial for the Democratic candidate.

US defence secretary arrives in Israel amid Iran nuclear talks

HRH The Duke of Edinburgh: A dear friend to Pakistan will be sorely missed

Reason behind violence in Northern Ireland