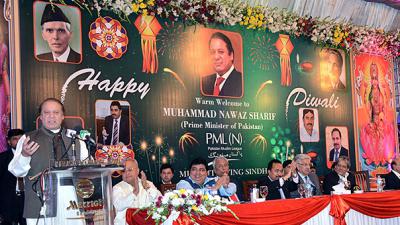 KARACHI: Prime Minister Nawaz Sharif on Wednesday said all the religious communities living in Pakistan enjoyed equal rights and reiterated his stance to safeguards their rights.

Speaking at a ceremony to mark the Hindu religious event of Diwali, he said every community living in the country whether Hindu, Muslim or Parsi everyone belongs to him and he belongs to them.

“I am a Prime Minister of all communities,” he said.

The prime minister conveying his warm greetings to the huge gathering of Hindu community underlined the need for forging further unity among all the communities.

He said it was his duty as the prime minister to protect rights of all communities and stand with them against any oppression.

Prime Minister Sharif said it was the lesson taught by Islam by his forefathers and by all religions of the world.

The premier said it was his agenda to forge unity among all the religious communities and called for assisting each other in the time of need. He said he felt immense pleasure in attending the event and told the organisers to invite him to all religious events of various communities.

“Even I would like to be among you in the colourful event of Holi in which multi colours are sprayed,” he added.

The Prime Minister also appreciated the message of religious hymns read out in the ceremony by saying that it was also his agenda to stand against the tyrant.

He also lauded the role played by the Hindu community in the development of the country and said they played significant role in the realms of education, judiciary, health and sports and produced notable personalities.

Prime Minister Sharif went on to say that Diwali brings a message of light and an effort to remove darkness from life. He referred to his family’s historical background and said that the close heart waves among people living together for years never fade away.

They lauded PM Nawaz’s vision of Pakistan and said the government’s policies would lead the countrymen to an era of progress and prosperity.

The Hindu elders also vowed to work for the peace, progress and integrity of the country.

Ramadan 2021: No power outages during sehri, iftar and Taraweeh

7 injured in blast during football match in Karachi

'All measures' will be taken to reopen blocked roads: Sheikh Rasheed