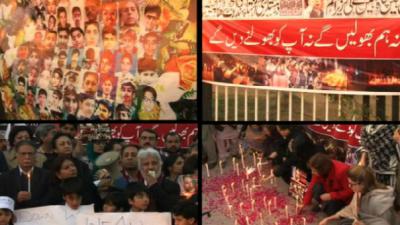 KARACHI: Activists, campaigners and members of the civil society gathered across Pakistan on Friday to hold demonstrations against terrorism and terrorist sympathizers – marking one month since a deadly attack by Taliban militants on a school in Peshawar killed over 130 children.

Demonstrations were also scheduled to be held in different parts of the world, including Boston, Dallas, Houston, New York, Washington, Los Angeles, San Francisco in the USA, the Canadian city of Toronto, London and York in the UK, Perth in Australia, Nairobi in Kenya, Berlin in Germany, and Dubai in the UAE.

Please put aside your cynicism just for a day, think of our children & commemorate the victims of #PeshawarAttack today- Jan 16 #NeverForget

Request every Pakistani to raise their voice against terrorism. Join the vigil/ protest in ur city. We owe it to the children. #NeverForget

The protest campaign was started by Mohammad Jibran Nasir, a lawyer and social activist from Karachi. Nasir earlier led protests against Maulana Abdul Aziz, the cleric of Islamabad’s Lal Masjid, when he gave statements supporting the Taliban shortly after the Army Public School tragedy.


Protesters also gathered outside Parliament House in Islamabad, holding candles and placards expressing solidarity with victims of the Dec 16 tragedy and anger at terrorists. Information Minister Pervaiz Rashid in his address said the entire world was united against terrorism and there was also no division on the issue in Pakistan.

In Video: Remembering the APS Massacre

Over 140 people – including 132 schoolchildren – were killed when heavily armed Taliban militants stormed the Army Public School in Peshawar on Dec 16 – the deadliest terror attack in the country’s history. The attacker went from classroom to classroom, shooting students point-blank in the head as well burning the body of a schoolteacher.

The bloodshed sparked demonstrations across the country, with protesters demanding the government to take firm measures to counter militancy and rising terrorism in the country.