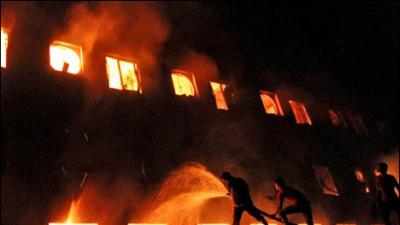 KARACHI: A fire broke out at a towel factory in New Karachi has been put out after hectic efforts of more than five hours.

More than 10 fire tenders and a snorkel took part in dousing the fire, engulfed all three floors of the building.

The fire brigade officials had declared it a third category fire.

Fire tenders that initially arrived to put out the fire ran out of water creating problems. The fire spread from the effected building to another towel-factory next door.

In order to control the situation, fire tenders from all over Karachi were summoned.