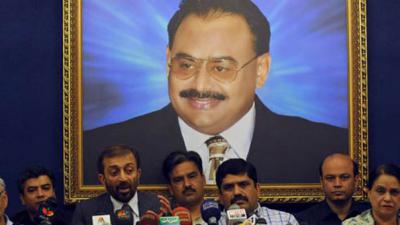 KARACHI: Following the registration of an FIR against Altaf Hussain for threatening Rangers officers, the Rabita Committee said on Tuesday that MQM was a ‘peace-loving, liberal and democratic party’ and would legally defend itself by remaining under the ambit of law and the Constitution.

In a statement issued here, they urged MQM workers and sympathisers to remain calm and keep unity among their ranks.

The committee said the MQM would continue its ‘constitutional, legal and democratic struggle under the leadership of Altaf hussain’.

Responding to a question regarding Rangers personnel, Altaf Hussain had referred to them as a thing of the past.

Meanwhile, police officials told Geo News that Shahzeb khanzada is a key witness of the case and can be summoned for a statement. They said that complete details of the interview have also been sought.

They said there are reports of other interviews of the MQM chief following the Nine-Zero raid and details of the same would be included in the investigation.

Rangers officer Colonel Tahir, meanwhile, has recorded his statement to the Civil Lines police asserting that words used by Altaf Hussain are a clear threat to the lives of Rangers officers.

PMD says Karachi to experience heatwave during next two days

Schools in cities with positivity ratio above 5% to be closed, offices timings restricted to 2pm