India is rape capital of the world, Pakistan tells UNHRC 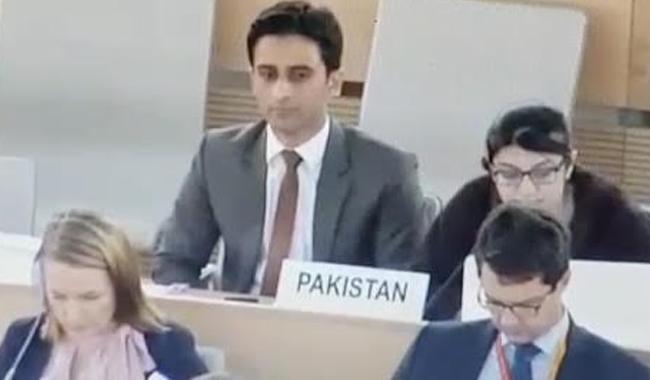 GENEVA: A Pakistani diplomat told the United Rights Commission (UNHRC) that India has become the ‘rape capital of the world’ as 327,000 crimes against women were registered in a single year in India, most of these involving rape or rape attempts.

Availing right of reply at the current 36th Session of the Human Rights Council, diplomat Murk Aijaz told quoting India’s National Crime Records Bureau statistics that more than 35,000 incidents of rape had occurred just in three years in India and almost 93 rapes were committed in the country each day.

“India has surely become the rape capital of the world where no woman is safe due to their own disgraceful policies against women,” she said.

She quoted reports by Asian Watch and Physicians for Humans stating that rape is used as a means of targeting women by the Indian security forces in an attempt to punish and humiliate the entire community.

She told the UN forum that horrific and barbaric atrocities in Kashmir are not isolated incidents “but they represent Indian mindset of systematic disregard for human life, human values, human rights and most importantly human dignity”.

The diplomat said quoting Amnesty International that a former Manipur state policeman was involved in more than 100 extrajudicial executions between 2002 and 2009.

“Journalists like Karun Mishra in Uttar Pradesh and Rajdeo Ranjan in Bihar were shot dead for writing reports that didn’t go good with the Indian government. 282,000 prisoners – 68% of the total prison population – were pre-trial detainees.”

She highlighted the widespread human rights abuses of religious and ethnic minorities as well as lower Hindu castes. “According to India’s official statistics, more than 45,000 crimes against members of Scheduled Castes and almost 11,000 crimes against Scheduled Tribes were reported in one year. India topped the global blast list with around 406 bombings taking place last year. We can well imagine the causes. Their policy of state perpetuated terrorism is now biting them back.”

Murk Aijaz said that he current BJP Government in India is the product of the militant, hate driven ideological parent known as Rashtriya Swayamsevak Sangh (RSS) and religious hatred is common in Indian that Subramanian Swamy, a senior BJP official recently declared in a speech that mosques are not holy places and thus can be demolished. “A number of churches were vandalized. A 71-year-old nun in the eastern state of West Bengal was gang-raped. And the beef-ban movement was spreading to new states. How can we forget the Gujrat killing of more than 2000 Muslims in which ruling party was found as the main culprit. With such leadership at the top which has no regard for life, recent barbarism in Indian Occupied Jammu and Kashmir was always on the cards.”

The Pakistani diplomat told the UNHRC session that Kashmiris are not scared of demanding their right to self-determination nor would Pakistan be intimidated by India. “We would stand with the people of Indian Occupied Jammu and Kashmir. Pakistan remains committed to resolve the Kashmir dispute according to the UN Security Council resolutions for a lasting peace in the region and beyond.”