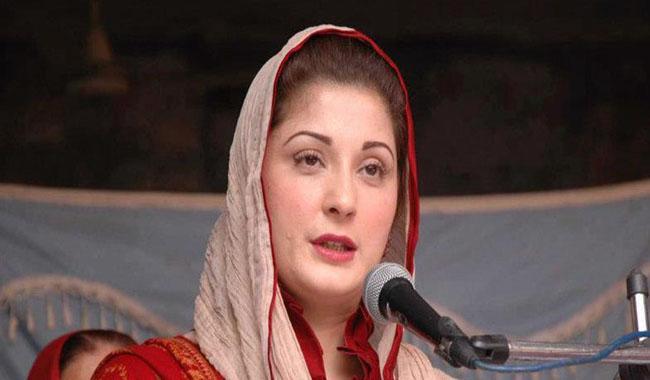 LAHORE: Maryam Nawaz on Thursday addressed a Pakistan Muslim League-Nawaz (PML-N) youth convention at Aiwan-e-Iqbal. While mobilizing the workers for NA-120 by-election, the daughter of former prime minister Nawaz Sharif said that she is witnessing a huge support from the people in the constituency.

Addressing a Youth Convention here at Aiwan-e-Iqbal, she asked the workers not to leave the arena even before news of victory on September 17, and to make the lion victorious with huge margin. She asked the audience to repeat her phrase "I love you Nawaz Sharif".

During her address, she lashed out at the PTI chief, terming Imran Khan as a stooge. She said that opponent is a liar and coward, adding that conspirators will have to face defeat in  NA-120 by-polls. She further said that it is not only an election but also a competition against the elements who hatched conspiracies against the development and prosperity of the country.

Maryam said that Pakistan's progress hinged on Nawaz Sharif, according to her, the country had to face different crises, terrorism, loadshedding without him.

CPEC project was launched in Nawaz government, and the country progressed by leaps and bounds when Nawaz sarif was in power, she added.

While highlighting former PM's steps toward development in the country, She said that it was Nawaz Sharif who established motorways and eliminated 20 hours loadshedding, menace of terrorism and other so many crises, and made a huge efforts to restore peace in Karachi and Balochistan. Nawaz  put the stock exchange on heights and gave the country stability, she added.