Attempts being made to influence Baldia fire probe: Rangers 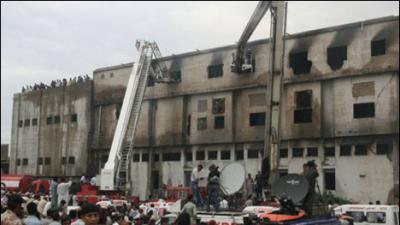 KARACHI: Sindh Rangers on Tuesday expressed concern over attempts by ‘certain elements’ to influence the investigation into the Baldia Town Factory inferno in which more than 250 workers were burnt alive.

A high-level meeting of Sindh Rangers was held here under the chairmanship of DG Rangers Major General Bilal Akbar to review Karachi’s law and order situation.

According to details, the meeting which was attended by Sector Commandos and Intelligence officials, reviewed the matter of sudden disappearance of Rizwan Qureshi, the key suspect in Baldia factory fire case.

Rangers spokesman further said that the meeting also reviewed the threats from an extortion mafia to an officer investigating the Baldia factory fire case and the also to the affectees.

The DG Rangers has also directed the paramilitary force to arrest the culprits involved in the Baldia factory carnage.

More than 250 workers were killed when a textile factory caught fire on September 11, 2012.

In februray, the rangers had submitted a JIT report to the Sindh High Court which revealed that 2012 factory inferno was not caused by a short circuit but in fact was an act of arson.

The report had further claimed that the Ali Enterprise was set alight after the owners refused to pay extortion money.