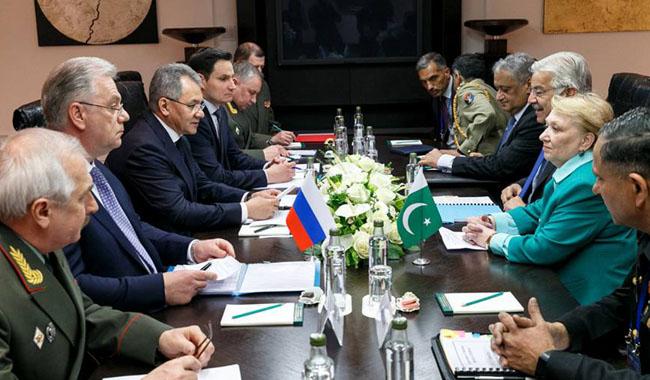 MOSCOW: Pakistan has asked Russia to lead the process of stabilization of the situation in Afghanistan. This was suggested by Defence Minister Kh Asif during a meeting with his Russian counterpart in Moscow.

Kh Asif is in Russia to attend VI Moscow Conference on International Security, where he met Minister of Defence Russian Federation, Sergei Shoigu on the sidelines of the moot.

The security situation in Afghanistan was also discussed during the meeting.

"The world is not getting calmer and stable, and in these conditions, we are again and again saying that fighting international terrorism requires the consolidation of all interested forces,” said the head of the Russian military department.

On this, Kh Asif said that Russia should lead the process of stabilization of the situation in Afghanistan and Pakistan would support all initiatives to bring peace in the country.

The participants noted the importance of defence ties between the two countries. First-ever joint military training ‘Freindship-2016’ last September was dubbed as a new chapter after strained relations the Cold War era.

"This year, our departments have rich programme of joint events. This is participation in counternarcotic exercises "Arabian monsoon – 2017", and the mutual visits of the leadership of the armed forces, and visits of military ships in the ports of both countries,” said Sergei Shoigu.

Sergei Shoigu also expressed his condolences in connection with terrorist attacks in the cities Parachinar and Lahore, which had taken dozens of lives, including servicemen.