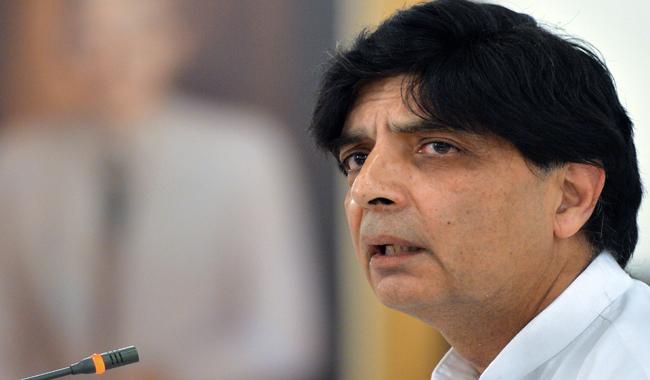 Speaking to the media, he said no Muslim can tolerate blasphemy against Prophet Muhammad (Peace be Upon Him), adding that offenders could not be caught without the assistance of social media networks.

The minister said how could blasphemy be called freedom of expression when nobody is allowed in Europe and America to doubt that Holocaust took place.

He called blasphemers  enemies of humanity and said it has become an international issue, which Pakistan would raise at  the international level representing the Muslim community.

Nisar claimed that several blogs containing blasphemous content has been removed and the Pakistan Telecommunications Authority (PTA)  has been directed to remove the content on rest of such pages.

He said that the emotions and feelings of Muslims must be respected. He labeled blasphemous content as an attempt to play with the emotions of the Muslim Ummah and directed authorities to prevent the spread of blasphemous content on social media by taking all necessary measures and ensuring that it does not circulate on the digital space in the future.

The prime minister urged the Foreign Office to play its role in approaching international organisations to convince them also to block blasphemous content on social media.

"The Holy Prophet Muhammad (peace be upon him) is the benefactor of entire humanity," said Nawaz.

Karachi's weather to remain dry for next 24 hours