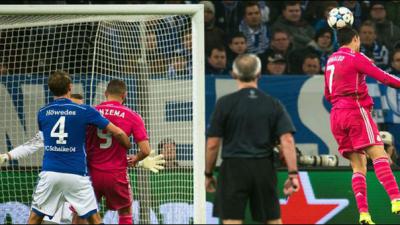 The holders -- whose other goal came through Brazilian Marcelo in the second-half -- will fancy their chances of easing through to the quarter-finals when they meet in the second leg next month.

Real´s victory -- which fortunately for the hosts did not come near the 6-1 hammering they took in last season´s last 16 first leg encounter in Germany -- equalled Bayern Munich´s record which was set back in December 2013.

Honours were even in the night´s other game where the Swiss side Basel -- who have never reached the last eight of the Champions League in its present format -- were held 1-1 by Portuguese side Porto, who won the competition in 2004.

Ronaldo ended his drought with a neatly-taken header in the 27th minute to edge him closer to both the overall goals record in all European competition and the Champions League.

Schalke suffered a further blow when their talented former Real forward Klaas-Jan Huntelaar had to go off injured shortly after the half hour mark.

The German side, though, didn´t fold like they did against the same opponents last year and had chances of their own principally through Felix Platee, whose fierce drive beat Iker Casillas but came back off the crossbar.

Cruelly for Schalke Real doubled their lead as Marcelo struck with a fine effort after being set up by Ronaldo.

Schalke coach Roberto di Matteo conceded that the difference in class between the two teams had told. "The quality made all the difference," said di Matteo, who guided Chelsea to Champions League glory in 2012. "Real had three chances and took two of them. Perhaps if our shot had not hit the bar and gone in things would have been different."

Basel had got off to the dream start as Paraguayan striker Derlis Gonzalez did superbly well to stroke the ball into the Porto goal despite being off-balance.

He, however, had to go off shortly afterwards with what looked like a calf injury.

The visitors -- who enjoyed an impressive group stage campaign -- had two goals ruled out for infringements with the second one quite harsh as Casemiro shot home through a crowd of players.
However, English referee Mark Clattenburg -- who booked nine players in the game -- ruled it out after a long consultation with his officials.

Porto´s star striker Jackson Martinez had been kept quiet for most of the match but when he worked his first real chance on goal the Colombian lobbed Vaclik but it was just too high and landed on top of the net.

The visitors, though, did get a deserved equaliser from the penalty spot -- Danilo converting after veteran 36-year-old Argentinian defender Walter Samuel had been penalised for handball.

Porto coach Julen Lopetegui said that he would have been disappointed to have lost the encounter. "Basel were very good on the counter-attack in the first-half," said the Spanish coach. "We dominated after the goal but it was difficult for us. "The goal that was ruled out early in the second-half surprised me a lot and it took four minutes to take the decision. "However overall it was a very good performance by us." (AFP)