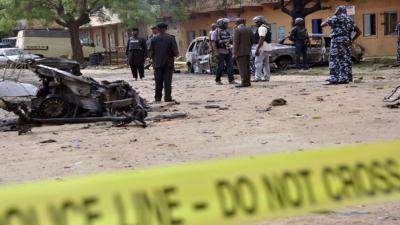 Kano: Two suicide attacks in northeast Nigeria killed at least 38 people Tuesday, after Boko Haram razed a town and as violence raged across the embattled region less than six weeks from elections.

The insurgency has already forced a delay in the vote, initially scheduled for February 14, and officials voiced hope that a regional military offensive could contain the bloodshed before the new polling day, March 28.

But the latest wave of attacks blamed on the rebels underscored the challenge facing Nigeria and its neighbours -- Cameroon, Chad and Niger -- despite claims of major successes in the joint operation launched this month.

Niger´s President Mahamadou Issoufou vowed that his country´s involvement in the four-nation coalition would herald the end for the rebels, whose six-year insurgency has killed more than 13,000 people.

"Niger will be the death of Boko Haram," he told a cheering crowd after a protest against the insurgents in the capital Niamey.

But Boko Haram has proved resilient throughout its deadly uprising an experts question whether the group can be overpowered in the short-term. (AFP)