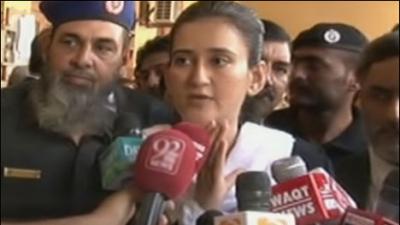 KARACHI: The main public prosecutor in the Baldia Town factory fire case, Shazia Hanjra, announced Monday that she was withdrawing from the trial.

According to sources, Hanjra has already sent her resignation to the Sindh government on grounds of lack of security.

Speaking to reporters here, Shazia maintained that she did not have the support of the investigating officer and could not continue the case any further.

She said that the case has been tampered with intentionally and that facts need to be revealed.

Shazia further said that she did not even receive copies of witness statements and that after two and a half years, it has been revealed that witnesses now number up to 950.

Hanjra had been assigned as Special Public Prosecutor to the case by the Sindh government since the start of the hearings in 2013.

On February 10, The Sindh High Court observed that the concerned trial court would make a decision pertaining to the Joint Interrogation Team (JIT) report of the factory inferno.

Meanwhile, Prime Minister Nawaz Sharif is currently chairing the Provincial Apex Committee meeting in Karachi where he will also be briefed in detail regarding the factory blaze JIT to take necessary course of action.