There can be no apology on Baldia Town tragedy, says Imran 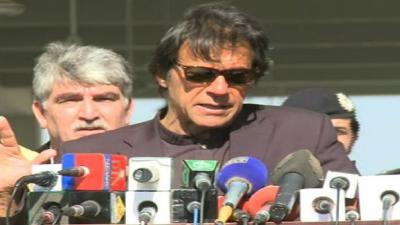 Attending the training session of the first female elite force in Khyber Pakhtunkhwa, the PTI chief said Altaf Hussain’s apology was a fine but there could be no apology on the Baldia Town factory fire tragedy.

Imran Khan said that immediate action should be taken over the JIT report of the factory fire which claimed the lives of over 250 people in Baldia Town. “Our demand is that the federal and provincial governments act on the findings of the JIT report on an immediate basis.”

Khan further said armed groups should not be allowed to operate in the country and prisoners cannot be released over their political affiliations. He added that it was Prime Minister Nawaz Sharif’s responsibility to ensure that armed wings of political parties were eliminated.

“PM Nawaz has been given a mandate that no armed group should be allowed to operate in Pakistan.”

The PTI chairman had been critical of MQM chief Altaf Hussain over the latter’s use of derogatory language against PTI female workers and Central Information Secretary Shireen Mazari.

On Tuesday, Altaf Hussain apologised to Shireen Mazari for his statements. "Shireen Mazari, I apologize to you. I am sorry," Hussain said during a television interview.