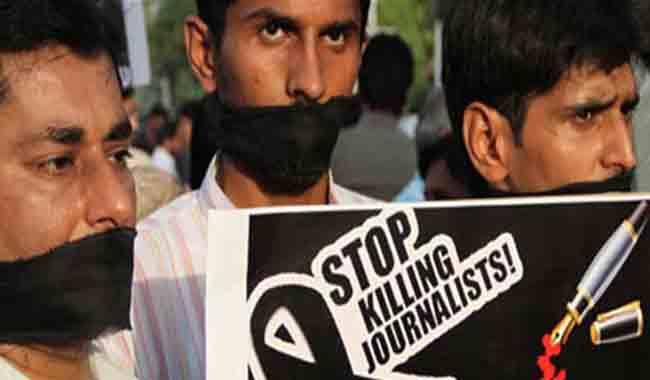 KARACHI: The freedom of press is a precious privilege that no country can afford to forgo; it is the fundamental right that affords the citizen their right to information and acts as a vigilante force against tyranny and state atrocities. Freedom of the press is the cornerstone of every democracy. However, in states where democracy is little more than fascism behind a façade of democracy, press freedom is the first casualty. And, this is the story of Pakistan today, Asian Human Rights Commission said on Tuesday.

According, to the annual report by Freedom Network, titled, Growing Sounds of Silence – The Year of Censorship, in the year 2014, 14 journalists were killed. But, it is the year 2015 that has really proved to be the year of gags and curbs on free speech.

Pakistan has been ranked the fourth most dangerous country in the world for journalists, with a total of 115 killings since 1990, according to a report issued by International Federation of Journalists (IFJ). Pakistan is rated “Not Free” in the Freedom of the Press Index 2016, and is ranked 147th out of 195 countries and territories worldwide. According to the Report, journalists in Pakistan experience official attempts to restrict critical reporting, as well as high levels of violence from both State and non-State actors.

The Constitution and certain legislations authorize the government to curb freedom of speech on subjects that include the Constitution itself, the armed forces, the Judiciary, and religion. Harsh blasphemy laws have occasionally been used to suppress the media.

In 2010 through the 18th Amendment, the right to information was inserted in the Constitution; the provinces were given power to legislate on the right. Khyber Paktunkhuwa has so far been the only province that has enacted an effective law. In all other provinces, the enacted laws have been a mere eyewash; the laws are weak on many fronts, as they have exempted all the major institutions like the Army, Judiciary, and other important departments of the State.

The resultant curb on access to information has affected the right to free press, as journalists cannot gain access to State files; it has jeopardized transparency. The increasing intolerance towards criticism and unearthing of State corruption has made it difficult for journalists to exercise their right to freedom of press and to access to information. The State and the powerful establishment, in connivance with non-state actors, have shrunk space for free press.

Pakistan returned to the notorious practice of “press advice” in 2015 with regulatory authorities for both print and electronic – Pakistan Electronic Media Regulatory Authority (PEMRA) and Press Council of Pakistan (PCP) – regularly “advising” the free press to avoid criticising the establishment.

On October 29, 2015 members of the National Assembly's Standing Committee on Information and Broadcasting proposed amendments to the Pakistan Electronic Media Regulatory Authority (PEMRA) law. If passed, the Act would outlaw the broadcasting of any language that is counter to the ideology of Pakistan or the sovereignty or security of the State; incites violence or hatred; or defames or ridicules the head of State, armed forces, or the executive, legislative or judicial branches of the State.

The journalists have continued to bear the brunt of violence by State as well as the non-State actors. The State has failed to bring to book culprits who have attacked journalists, thus providing them with impunity. Many investigation committees and judicial commission have proved to be a waste of time.

A judicial commission set up in Pakistan to investigate a debilitating attack on prominent journalist Hamid Mir concluded in its report that the commission has not been able to determine the actual reasons or the culprits involved in the high-profile case. And, this was a judicial commission comprising three Supreme Court of Pakistan judges – Justice Anwar Zaheer Jamali, Justice Ejaz Afzal and Justice Iqbal Hameedur Rahman – which was established by the government on 21 April 2014, two days after the murderous attack.

The impunity enjoyed by those who attack journalists is seriously hampering press freedom in Pakistan. According a report prepared by Reporters without Borders, role of non-state groups — often militants such as the Islamic State group (ISIS) —is rising in terms of perpetrating attacks against journalists.

In January 2016, two journalists lost their lives at the hands of unknown assailants. On 16 January, unidentified gunmen shot Muhammud Umar, a correspondent of a local newspaper at, Dera Ismail Khan, a town in Khyber-Pakhtunkhwa Province. Umar sustained critical injuries and died on arrival at the District Headquarters Hospital. Within three days, another journalist, Mehboob Shah Afridi, a journalist at Aaj TV, was killed in a suicide bomb attack on the outskirts of Peshawar at the Jamrud Check Point, in Khyber area. The blast also killed at least a dozen others at the scene.

The year 2016 began with many unfortunate incidents. The office of a TV channel was attacked with explosives. This attack was in the heart of Islamabad, and was claimed by ISIS on 13 January. After a few weeks, supporters of the killer of Punjab Governor Salman Taseer attacked the Hyderabad Press Club and the Karachi Press Club. Journalist Hamid Mir, in his article published in daily “The News” has stated that the Editor-in-Chief of the Jang group, Pakistan’s largest conglomerate of newspapers, was booked in more than 135 FIRs in all four provinces, under baseless blasphemy charges, in the last two years.

It is lamentable that though on face value Pakistani media looks very free, in reality it is under attack from all sides. Journalists have to risk their lives in the line of duty. The growing intolerance within the society has made reporting of truth a culpable exercise. No State institution, be it the Judiciary or the Executive tolerates criticism – a sign of immature institutions. As George Orwell once said, “Freedom of the Press, if it means anything at all, means the freedom to criticise and oppose”.

Govt decides to run Roosevelt Hotel under a joint venture