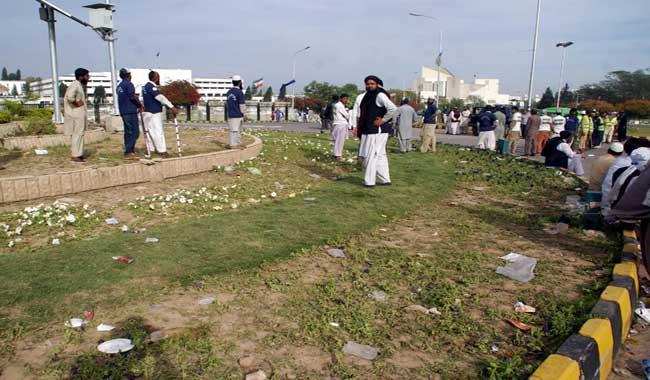 ISLAMABAD/KARACHI: The sit-in at Islamabad’ D-Chowk has entered its fourth day Wednesday as protesters violated a deadline given by the government to vacate the Red Zone by midnight on Tuesday.

Interior Minister Chaudhry Nisar Ali Khan announced on Tuesday that the government will clear the Red Zone of protesters today (Wednesday) “at all costs” if they didn’t disperse during the night.

“The government, however, wants them to vacate the D-Chowk peacefully and without hurting any person,” the minister said. “Dead bodies will not be provided to people for political gains.”

According to a charter of demand circulating on social media, the Sunni Tehreek and other religious outfits have called for implementation of Sharia and release of prisoners.

The protesters also demanded the government to declare Mumtaz Qadri as martyr and hang Asia Bibi, an accused of blasphemy.

Heavy contingent of law enforcement agencies have reached D-Chowk to clear the Red Zone if the final round of talk fails.

The final round of talks is expected to take place at 12 noon today.

Several rounds of talks between the government and protesters have taken place since yesterday. In the first round of talks the administration and cleric Ovais Noorani met Ijaz Qadri and Professor Ashraf at Punjab House.

A second round of talks was held at federal minister Khwaja Saad Rafique’s residence.

Meanwhile, in Karachi supporters in solidarity with the Islamabad protest have staged a sit-in at Numaish Chowrangi, blocking the flow of traffic through M A Jinnah Road for three days now.

Metro buses remained off the track in Islamabad and Rawalpindi for the fourth consecutive day for security reasons which added to the misery of those commuting between the twin cities.

The government had on Monday registered an FIR against Sarwat Qadri, Khadim Hussain, Afzal Qadri and Dr Ashraf.

The cases have been registered at the I-9, Secretariat and Kohsar police stations. Charges against them include violating the Loud Speaker Act, vandalizing public property, instigating hate against the government and violating section 144 at the Red Zone.