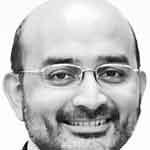 The rise of empires and nations throughout history has followed the rise of their cities. The cities became cultural, economic, political and social centers attracting citizens, ideas, inventions which reinforced the economic and political strength of these empires.

Cities represent organization, community and imagination of humanity, as well as our abilities to collaborate on ideas and ideals to build great monuments and nations. Vienna was a cosmopolitan city with inhabitants from lands as far away as from the Austro-Hungarian borders of Anatolia to Prussia. Great minds like Sigmund Freud, Joseph Schumpeter and Leon Trotsky lived in close quarters – thus the ideas that led to 20th century Western dominance were shaped in cities.

The significance of cities has only increased over time – urbanization and technology led to concentration of urban populations; more productive agriculture boosted food production; and manufacturing enabled employment and goods to become widely available. This made cities into hubs – self-reliant and self-sustaining.

South Korean development, known as ‘Miracle on Han River’, is Seoul’s story of growth where the capital city accounts for half of South Korea’s GDP. China’s meteoric rise is attributed to the growth of new metropolises like Shenzhen which, from a small fishing village in the 1980s grew at 20 percent per annum till 2016. Cities are anchors of economic, development and tech advancement of countries, as evidenced by Brookings Global Metro Monitor: “300 largest metro areas accounted for 36 percent of global employment growth and 67 percent of global GDP growth between 2014 and 2016”.

Karachi was to be such a city for Pakistan; its growth and development was to lead Pakistan’s rise as an Asian power. But past decades have been its decline, even though 55 percent of total tax is raised from Karachi, a lion’s share of 95 percent of taxes raised from our ten major cities. Despite its massive population, Karachi’s GDP per capita was 44 percent higher than that of the national figure, while its gross value added per worker in 2012 was twice the national average.

Unfortunately, Karachi’s potential is held back due to its political economy, and competition between different interest groups for a share in its pie, with the pie shrinking simultaneously. Karachi ranks number 9 on the ‘Ease of Doing Business Index’ in Pakistan with Lahore, Rawalpindi and Faisalabad, providing stable and economically viable environments. According to the World Bank, Karachi ranks in the bottom 10 cities for livability, only 55 percent of the city’s water needs are met and 60 percent of solid waste never reaches a dumpsite.

So, Karachi’s lack of competitiveness, law and order issues and red tape have led multiple foreign investors like Hyundai and Renault to shift their production plants to Punjab.

However, despite these seemingly insurmountable and intractable problems, Karachi can be reinvigorated. To this end, Karachi’s issues need a deeper fix than simply better policy. First, the city’s administrative structure needs to mirror its economic, social and political structure to have autonomy and independence to raise taxes and deliver services, through locally accountable assembly and mayor. London, New York and Beijing have powerful mayors and assemblies; Paris a chief executive. In this vein, so must Karachi, so as to unleash its economic potential for Karachi, and for the rest of Sindh and Pakistan.

The fragmented administrative structure of Karachi only represents its fragmented identity. It’s the only cosmopolitan city of Pakistan – a mini-Pakistan of all languages and ethnicity within the country. New York, Paris and London have many nationalities and ethnicities, yet this is trumped by stronger common identities of being a New Yorker, a Parisian or a Londoner that votes in their city’s best interest. Unlike these cities, Karachi votes along ethnic lines, aggravated by insecurities created by interest groups, leading to a dysfunctional political system serving interest groups rather than the city.

If the citizens of Karachi desire its administration to be cohesive and responsive to their needs then the citizens must first rise above their own fragmentation to develop a self-confident identity encompassing all ethnicities, diversity, religions and vote only on the basis of who’s good for Karachi.

Karachi at present highlights Pakistan’s economic, social fragmentation but in fact has the capability to manifest itself as Pakistan’s prototype solution for a cohesive, unified society. This cohesive and unified identity will evolve the politics and administrative structure of Karachi, paving the way for the rest of the nation.

There was a time that history terms the Golden Era of the Islamic World when books were written in Cairo, published in Damascus, and read in the libraries of Baghdad. The best brains in three different geographical territories synergized to create lasting intellectual and cultural capital for humanity. Fast forward now to modern-day Karachi: this Mega City, poised to be a Super City, presents fantastic opportunities as the intellectual, cultural and entrepreneurial capital of Pakistan.

In times of cynicism, it is easy to dismiss Karachi. But Karachi can be rejuvenated through a convergence of intellect, street-smarts, knowledge, and upward mobility based on merit not ethnicity or lineage, plus a common identity. Karachi can attract the requisite talent, ideas and ideals to become a Super City that synthesizes the cultural and entrepreneurial achievements of Cairo, Damascus and Baghdad of the old to propel Pakistan to become a great Asian power of the 21st century.

The writer is the founder of Cordoba Ventures and Rahgeer Fellowships.