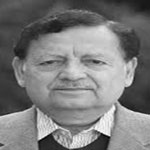 What was killed in the form of the bodily existence of Mashal Khan was liberal and progressive thinking and 21st century global thinking. But, who killed him: the one who shot him, those who beat him up or still others who incited the group to turn on him and who then planned a pre-meditated murder?

The answer is not as simple as it looks. There are millions who would say yes to this ghastly murder and there are millions of others who have already bemoaned it. The lynching of a young man in the Abdul Wali Khan University in Mardan at the hands of religious bigots has put the state in the dock for its acts of omission and commission. Several examples of the state’s input into the system at large make it almost predictable that this pattern of behaviour can be expected any time in any part of the country.

The gruesome fact is that the modern state system in this country, as represented by the founding fathers, was replaced by the second generation under Zia. Ever since the 1970s, the state has persistently followed a strategy of adopting a model of statehood that pursued religious ideology in the spirit of the pre-Westphalian system whereby the European states fought for the supremacy of their respective religious doctrines. National ideology was replaced by national interest as the guiding principle of the polity after the Westphalia Treaty in 1648.

What Zia and his ardent followers did was to medievalise the state by redefining its interests in ideological terms. They ended up putting the national interest under the shadow of national ideology. While Jinnah had declared that faith had nothing to do with the business of the state, subsequent generations of rulers sought to conflate religion with politics and turned people into hate robots against religious and sectarian minorities as well as against leftists and progressives among the intelligentsia on and off campus. Apparently, the state establishment is not yet ready to cut its losses.

Secondly, the state withdrew from a robust crime and punishment regime in the country – to the point where militancy threatened to destroy the social order. It started the Karachi operation not after the first murder or the one-hundredth murder or the one-thousandth murder committed due to ethnic, religious and sectarian hatred, but long afterwards. Pakistan, the most powerful Muslim state, did not act while the world cried that the Taliban had taken over the tribal agencies and Swat and that they were only 60 miles from Islamabad. The state allowed crucial social, cultural, political and territorial space to terrorists. Only after a 17-year-old girl was publicly lashed by the Taliban did an operation start in Swat. And, several years later, the North Waziristan operation came after many more deaths.

By then, society had become enamoured of the Taliban’s message of jihad against the West and against Western thought at home. The nation ignored the humanist message of those on the wrong side of the Taliban, people such as Malala Yousafzai. The youth in this unfortunate nation does not admire this young lady. Their young minds are polluted by sentiments against global civilisation, couched in a mega-narrative that seeks to throttle freedom of expression. The state-sponsored educational curriculum has injected hatred against those who do not toe the line. That is how Mashal Khan and thousands like him were tainted as anti-Pakistan and anti-Islam. Social McCarthyism at its worst has become the new intellectual mainstream.

The state has somehow allowed a free hand to mob justice as opposed to court justice. Not a single case of this nature should have happened, given the sophisticated and mature institutional structure and ethos of the state. But there are numerous cases of lynching such as the case of the two brothers in Sialkot and the Christian couple who were thrown into a brick kiln. We have not heard about the perpetrators of these violence crimes being brought to justice. The state’s lack of will or power or both to bring militants of all hues to justice is a great disservice to the nation.

If the state is indignant and inefficient – even an accomplice in terms of provoking cultural violence through education – society is equally indulgent in non-civil imagination and action. There is widespread social acquiescence to violence in pursuit of the perceived sacred causes. Many young men like Mashal Khan have been subjected to social apathy towards violence. The social conscience of the country is not yet dead as demonstrated through the widespread condemnation of this young man’s murder. But it is dying a slow death.

A chain of events, ranging from Shanti Nagar to Shahdra to Youhanabad, falls in the same category. Similarly, the examples of burning dacoits – real human beings made of flesh and blood – in Karachi and elsewhere are also appalling. Criminals and the accused are treated as the condemned in a medieval framework of thought and practice.

The intellectual core of society – the educated and professional middle class – is unfortunately agenda-driven and mission-mantled rather than pragmatic and progressive. State functionaries from the security establishment, the administrative elite and – most tragically – sections of the higher judiciary are increasingly isolated from the global perspectives on crime and punishment, women’s rights, and freedom of expression. What is needed is not to de-radicalise militant non-state actors but those occupying responsible positions within the state, its educational infrastructure and the electronic media. Radicals within the system provide space for radicals outside.

Both state and society increasingly tolerate vigilante culture, the curse of these modern times. Militants are not brought to justice openly and clearly and therefore the message of retribution is not internalised by people. Vigilante culture kills and breeds killers. One can control it by carrying out justice in every case. For that, law must be the most essential commitment of citizens. Ideological socialisation for three generations has brought us to the brink of disaster. Only legal socialisation of our youth can breed a rule-based tolerant behaviour through textbooks, classrooms, playgrounds and other campus activities.

Mashal Khan was killed because our culture sanctions killing. There is no public agenda for carrying out a war on the inhuman, subversive and barbaric dimensions of our culture exercised through honour killings, karo kari, swara, vani, tribal feuds and panchayats ordering gang rapes. Clerics are increasingly issuing edicts against minorities and ‘non-practising Muslims’. The state needs to do better than witnessing it all as a bystander. Otherwise, Pakistan will continue its downward march to Hobbes’s state of nature where people are at each other’s throats.

What is at stake is the liberty to create and exchange ideas on university campuses through peaceful means. Hate-based violence must be firmly couched in the crime-and-punishment lexicon. Murder is crime; this lesson must be taught and learnt through both short-term court-based pursuits and longer-term intellectual activity in the realm of education and media. It is intellectually cultivated anger against perceived ideological adversaries that killed Mashal Khan in the 70th year of the country’s independence. Long live Pakistan.

The writer is a professor at LUMS.