Life becomes a roller coaster ride when the Lux Style Awards are around the corner, especially for the organizers who spend endless days and nights ensuring that the show lives up to expectations.

Atif talks to Instep about his first time as host and what all he’ll be bringing to the show.

Life becomes a roller coaster ride when the Lux Style Awards are around the corner, especially for the organizers who spend endless days and nights ensuring that the show lives up to expectations. It was on one of those endlessly busy Sunday afternoons that a press conference was announced to reveal a huge beam of news for fans.

“Atif Aslam will be hosting the Lux Style Awards this year,” this year’s Show Director Hassan Sheheryar Yasin announced right before the superstar walked in to huge applause. Before Atif arrived, HSY had made generous introductions to the pillars that LSA stands on year after year: Nabila, Fareshteh Aslam, Nadeem J, Fariyha Subhani and Raheel Pasha from Unilever. Other than Nabila, who’s a style icon and an integral part of the LSA red carpet, the rest of this group remains unseen as it works backstage, tirelessly, and it was good of the host to give credit where it is due.

Eventually Atif entered and after acknowledging his role in this year’s event, he called for his guitar and sang a few opening lines from his latest single, ‘Younhi’.

I caught up with Atif after the press conference, while he was having a quick lunch, before the eventual and inevitable spin cycle of rehearsals began.

Nerves, pressure…how did it feel to be hosting a show for the first time?

“Feels good, actually,” he replied in his usual state of calmness.

This is not the first time Atif will be taking the LSA stage though. He’s had his moments and my ultimate Atif Aslam-LSA moment would be his emotional performance with Reshma in 2008. The two sang ‘Lambi Judai’ together and there wasn’t a dry eye in the entire audience. 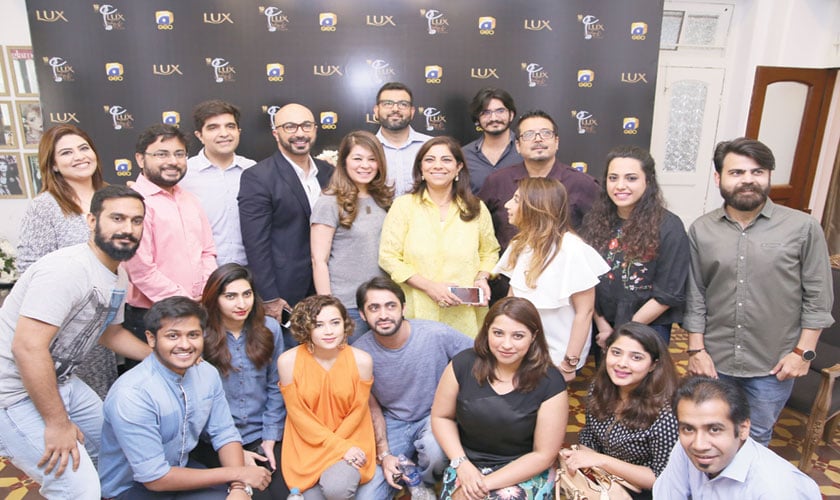 Life becomes a roller coaster ride especially for the organizers of the Lux Style Awards who spend endless days and nights ensuring that the show lives up to expectations.

Atif won’t just be hosting the Lux Style Awards but he will be performing as well and while he couldn’t reveal too much he did say his performance would be a mix of old and new songs.

“My performance will have a lot of emotional value to it,” he said. “But at the same time it will be very contemporary and will have a new sound to it. It’s something that I’ve never done before.”

“Of course Atif has been at the LSAs before and Atif has had magical moments at other award shows as well because that’s Atif; he comes and creates magic,” HSY added. “But this time it’ll be Atif like never before. He’s hosting, he’s singing, he’s got a new sound, a new avatar.”

Atif also spoke about sharing the spotlight with emerging talent. Which of the emerging nominees were his favourites, I asked him?

“Well, I like SomeWhatSuper. I like that rapper dude, the Sibbi boy,” he said, referring to Abid Brohi, who went viral with his ‘Sibbi Song’. That’s an indication that you’ll hear the ‘Sibbi Song’ at the LSAs too. “Mooroo has great production value.”

“These guys deserve the platform; they all deserve a chance,” Atif continued. “My seniors and mentors never gave me a chance. This is a big opportunity for these guys and they will do well.”

Atif Aslam has a gigantic fan following and the halo of his popularity, combined with the fresh sounds these indie acts bring, should make for very interesting show content. It doesn’t end there of course; anyone following Hassan Sheheryar’s Instagram feed will get a vivid idea of the people involved in the Lux Style Awards this year. So far we’ve seen Atif Aslam, Ali Zafar, Osman Khalid Butt, Mahira Khan, Sheheryar Munawar, Bilal Ashraf, Feroze Khan and Humaima Malick. We’ve heard of a lot more so this does promise to be a fun and eventful show!