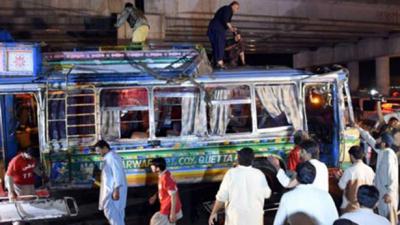 QUETTA: Police have registered a case of the Quetta bus bombing in which eleven people were killed and 23 injured on Saryab Road here on Monday night.

The case was registered against unknown persons at the Saryab Police Station and includes murder, attempted murder, anti-terrorism and explosives acts.

Police said the explosion in the passenger bus was carried through a timed device and at least six kilograms of explosives’ were placed on the roof of the bus.

The explosion came as night fell and people working in central Quetta left for their homes in the outskirts of the city.