Six children of a family killed in Lahore fire 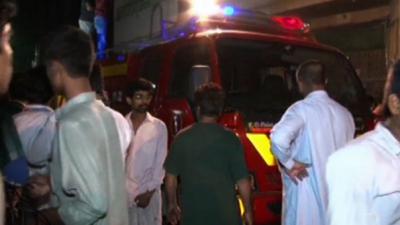 LAHORE: Six children belonging to the same family were killed early Sunday morning when an electrical short circuit sparked a fire which engulfed their house in Shadbagh area of Lahore.

The siblings were said to be between the ages of 1.5 and 12 years.

The short circuit initially sparked a fire on the first floor of the three-storey building where three of the children were asleep. The smoke and fire caused the three children to suffocate to death.

The fire quickly spread to the second floor, where the other three children received severe burns. The children were taken to the hospital but doctors were unable to save their lives.

The mother was rescued alive but wounded and has been hospitalised, he said, adding that the father was not at home when the fire broke out.

Amid tears, the unfortunate family laid the bodies of the six children to rest later on Sunday.

Speaking to Geo News, resident of the neighbourhood blamed the firefighters of responding late and arriving at the scene without adequate arrangements.

“If they would have reached the location on time then at least four children could have been saved,” said one neighbour who did not give his name.

Another neighbour said firefighters arrived around 45 minutes after they informed Rescue 1122, and that “either due to a technical fault or incompetence” they were unable to douse the fire with water for at least seven more minutes.

Police has started its investigation into the incident.

Punjab Chief Minister Shahbaz Sharif has ordered authorities to investigate and find out what caused the delay in firefighters reaching the scene.