Humanoid robot can recognize and interact with people 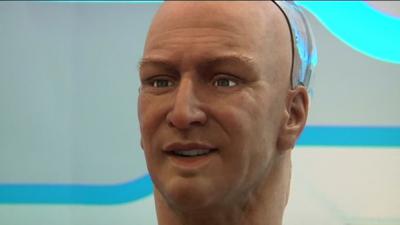 A humanoid robot which can mimic human expressions greeted visitors at a Hong Kong electronics fair.

The robot head, known as 'Han', can also hold simple interactive conversations with the crowd.

At the touch of a button using a mobile phone app, Han can smile, wince, frown, wink, or even act drunk.

About 40 motors control his face to form delicate facial expressions, according to product manager at Hanson Robotics, Grace Copplestone.

The robot can also respond to his environment, thanks to several cameras inside his eyes and chest.

"So Han's really exciting because not only can he generate very realistic facial expressions, but he can also interact with the environment around him. So he has cameras on his eyes and on his chest, which allow him to recognize people's face, not only that, but recognize their gender, their age, whether they are happy or sad, and that makes him very exciting for places like hotels for example, where you need to appreciate the customers in front of you and react accordingly," Copplestone said.

During the Global Sources electronics show, in which Han gave demonstrations every hour, visitors could also have a simple conversation with him.

One visitor, businessman Harbhajan Singh Sethi from Mumbai, joked with the robot, "I think you are perfect man for my wife," to which Han quipped, "I don't have to do whatever you say. I have my own free will."

Another visitor, Xiao Yong, who owns a technology company in the southern Shenzhen city, said he was also impressed by the robot.

"I think it's very magical, because the robot's facial expressions are very rich. When I greeted him, he responded. When I asked him to smile, he smiled. He can flirt and wink. It's magical. It's very well made," Xiao said.

Copplestone added that some of the robotic technology, such as facial recognition, is available on open source; meaning robot developers around the world can use the same software.

A unique feature of Han is his human-like skin, which is created by a patented material called "Frubber," short for "Flesh Rubber", an elastic polymer.

Copplestone said the human-like robot heads could serve a range of functions, especially where face-to-face communications is important.

"There are three markets we are really excited about. One is hospitality, so for example, the receptionist behind desk and hotels. The second one is entertainment, so casinos, theme parks and museums. And the third is health care, and that's in two ways. One is medical simulation. If you can provide doctors with mannequins that have very realistic facial expressions on them, that provides a very beneficial piece of training to the doctor, and the mannequin can travel over the world to do that. Another area of medical care is for the elderly. We believe a human face on a robot makes it far more approachable, and efficient, and effective in caring for older people."

The Hong Kong based company aims to commercialize Han's technology on a different face, an Eurasian female called Eva, and plans to produce hundreds of Evas this year. The price is yet to be determined.

Han made its debut to the public earlier this year in January, during the Digital-Life-Design fair in Germany.

How can I look at others' WhatsApp status without them knowing it?

Instagram and Messenger have come up with new messaging features