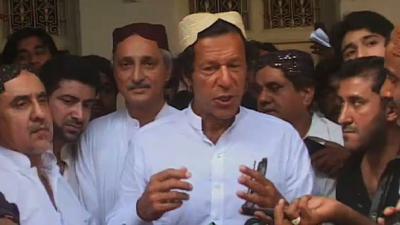 He will participate in the campaigning for electioneering in NA-246 constituency.

Addressing the media in Hyderabad today, the PTI chairman congratulated everyone on the formation of the Judicial Commission today – which is to be headed by the Chief Justice of Pakistan.

He went on to say that now PTI would focus its attention on Sindh as the state of affairs in the province is appalling.

Earlier today, speaking to reporters outside the shrine of Shah Abdul Latif Bithai, Khan stressed that the local bodies (LB) elections were essential to empower the people of Sindh.

The PTI chairman said the LB system was a problem across Pakistan placing the blame on the PPP and PML-N for not conducting LB polls in Sindh and Punjab.

“As long as local bodies’ elections are not held, people at the bottom are not given powers and this system of centralised control is not broken, the poor will keep getting poorer and the system will not change,” he said.

Khan was welcomed by a crowd of supporters as he paid a visit to the shrine of the revered saint.

“We have come to Shah Lateef’s shrine, and this is where we begin our campaign in Sindh. We are trying to bring the change that the entire Pakistan…urban and rural Sindh is dreaming of,” he said.

Khan had earlier reached Hyderabad where supporters of his party had gathered at the airport to welcome him.

Television cameras showed PTI workers who had been waiting for hours to meet the party chairman clash with each other outside the airport in Hyderabad.

Imran Khan went straight from the airport to visit the shrine of Shah Abdul Latif Bhitai in Bhit Shah.

The PTI chairman stayed in Bhit Shah for about an hour before he headed to Karachi where he will campaign for Imran Ismail, his party’s candidate in the NA-246 by-election.


Going to Karachi to end “atmosphere of fear”

Speaking to reporters before leaving for Hyderabad this morning, Khan warned that his party would take legal action in London if anything happens to workers in Karachi. He said he was going to Karachi to end an “atmosphere of fear”.

“These places will remain no-go areas if people like me don’t go there,” he said, referring to Karachi NA-246 Azizabad constituency which is considered a stronghold of the Muttahidda Qaumi Movement (MQM).

"This atmosphere of fear which restricts voters and candidates will have to end. These no-go areas are unconstitutional,” he said.


The PTI chairman said that he would campaign with party workers and supporters on Thursday in NA-246.

He said that his party has a team of lawyers in London who were ready to take legal action if anything happens to PTI workers or supporters in Karachi.

“We have a legal team in London. If anything happened to my workers, we will take legal action against (MQM chief) Altaf Hussain,” he said.

“He incites people to violence, and this is against British laws. We have noted (his) speeches, and if anything happens to anyone we will go to court (against Altaf Hussain),” he warned.

When asked if the PTI was looking to form an alliance with the Jamaat-i-Islami for the NA-246 by-polls, he said that talks were underway with the party.

He said that he would also speak to JI chief Sirajul Haq for cooperation in the NA-246 by polls.