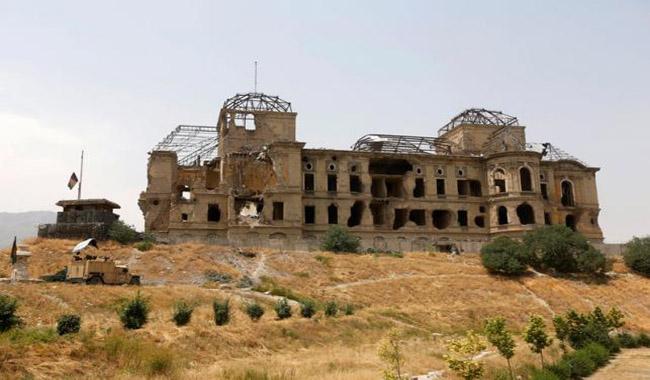 KABUL: With collapsed roofs and bullet-strewn crumbling walls, the derelict Darul Aman palace has become a symbol of failed attempts to bring peace to war-torn Afghanistan.

Decades of fighting have eroded the grandeur of the European-style palace, built by King Amanullah Khan atop a small hill on the outskirts of Kabul in the early 1920s following full Afghan independence from Britain in 1919.

Darul Aman, which means "safe haven" in Arabic, was burned several times, including during the 1979 Soviet occupation, before being wrecked by fighting. It was abandoned during the civil war in the 1990s.

While most of Kabul has been repaired since the city was ravaged by wars and Taliban occupation, the palace remains in ruins. A haunting memorial to the country's bloody past.

Until recently, tourists could make friends with the guards who patrol the site and sneak in to take photographs of the bombed-out building but that privilege has since been taken away.

What was once a home to royalty is now daubed with graffiti and home to stray dogs, snakes and scorpions.

While the dust settles on the rubble, just next door sits the pristine National Assembly which was inaugurated in December following a near $100 million build.

With that complete, President Ashraf Ghani has now set his sights on the palace.

Last month, he launched a bold reconstruction plan to turn the palace, about 15 km (10 miles) from the city center, into a museum and venue for national ceremonies.

Fundraising for the project, which will also cover restoration of the nearby Tajbeg Palace, began in 2012 with a government campaign.

The project will take at least three years and could cost up to $20 million, Abdul Aziz Ibrahimi, a media adviser for the ministry of Urban Development and Housing, said last month.

Some Afghans have suggested the palace be left as is, as a reminder of the awful destruction that war unleashes.

But the plan is to rebuild, even though the latest phase of Afghanistan's decades of conflict seems from over and could still derail the good intentions.