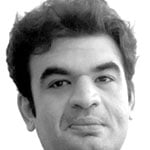 Waseem Akhtar will be Karachi’s least powerful mayor in recent history. The problem isn’t his incarceration. Politicians in Pakistan tend to serve long prison sentences between short spaces in power so Akhtar is just putting a down payment on a future home. His wings were clipped by the provincial government before he could learn to fly.

During the five years when Sindh was being governed by a mishmash of the commisionerate and township systems, the PPP government went about grabbing as many powers as it could – powers which previously rested with the mayor. It accelerated the process in the last year, even while first cynically delaying holding local elections and then transferring whatever powers were left to the new representatives.

In April, an amendment was added to the Sindh Local Government Act allowing the provincial government to ‘monitor’ local government representatives, which was intended to be as creepily Orwellian as it sounds. Municipal and metropolitan corporations, in a section meant to empower them, had most of that power taken away by a caveat forbidding them from carrying out duties already assigned to other agencies – which meant pretty much every conceivable power.

The PPP also wants all the trash. Last year, it set up the Sindh Solid Waste Management Board and put it under the control of the chief minister, making him the ultimate figure responsible for collecting and disposing garbage across the province and – maybe more importantly – control over the funds and assets that were previously vested in municipal and metropolitan corporations and committees. Just a week before the mayoral elections were held, the provincial government took charge of the Jam Chakro and Gond Pass landfills on paper. Then it realised that the Karachi Metropolitan Corporation owed contractors about Rs180 million and declined to start operating it till the liabilities were cleared.

The nearly-toothless KMC also washed its hands off the matter. Not that the KMC would have been able to exercise any of its powers even if they hadn’t been snatched away from them. The Sindh government hasn’t bothered to follow its own local government bill and set up a financial commission to distribute money to local representatives.

The PPP will never admit this but it at least has the realpolitik reason of wanting to keep as many powers as it can away from its MQM rivals. It has done so with ease thanks to its majority in the Sindh Assembly and without any public outcry thanks to the MQM’s ongoing pariah status.

In Lahore, Punjab Chief Micromanager Shahbaz Sharif does not even have that excuse. The PML-N swept the city. But the CM is more comfortable being the titular head of everything and giving governing authority to the bureaucrats who are vital to his rule rather than hand over powers to the mayor – or the Lord Mayor as Lahore so colonially calls it. Local government plebs would only get in his way.

Like its Karachi sibling, the Lahore Development Authority comes under the provincial government and its governing body is comprises technocratic mandarins. The Water and Sanitation Agency, the Traffic Engineering and Planning Agency and Town Planning Wing all come under the LDA. At least the Punjab government one-upped its Sindh counterpart and plans to release a transition grant of Rs650 million to local government representatives. The most recent budget for the LDA is nearly Rs94 billion or 145 times what all the new local reps will get combined.

We can be sure, though, that no matter what role local representatives are given in the district health and education authorities, their role will lean towards the ceremonial. Punjab Local Government Minister Rana Sanaullah, whenever questioned about the powers they will be given, has said that they will have control over parks and streetlights so they can take solace in that.

In a way, this defenestration can be blamed on devolution. The 18th Amendment gave the provinces power to decide how to divvy up power and resources at the local level. Previously, the terms of local engagement had been set by military dictators desperately seeking legitimacy. The current process is obviously far superior but there it can be argued that the centre decided to punt the question to the provinces knowing they would never willingly give up that power. To bolster that perception, the PPP was in charge at the time (and it has never been a friend of local government). It also never even tried to clarify the division of powers in the provinces when debating and passing the 18th Amendment.

The ideal for local government can be found – of all places – in the bureaucratic bastion of Islamabad. There, the newly-inducted mayor Sheikh Ansar Aziz was in a tussle for power with the Capital Development Authority. First, Nawaz Sharif transferred a couple of parks to the Municipal Corporation of Pakistan. Then he put 23 departments of the CDA and its 7000 employees under the MCI. Finally, Nawaz took devolution to its logical conclusion and made Aziz a board member and then chairman of the CDA.

It would be easy to say that Nawaz took this decision only because the new mayor is from his own party. But the path of least resistance for him would have been to follow his brother’s lead and not make an enemy of the bureaucracy. Taking Aziz’s side is only the beginning of the battle. Laws will have to be changed, the CDA’s functions properly handed over to the MCI, budgets to be approved and so on.

And the civil service will fight every change to the bitter end. As the first and last word on government bureaucracy, the British TV show ‘Yes, Minister’, put it: “The three articles of civil service faith: it takes longer to do things quickly, it’s more expensive to do them cheaply and it’s more democratic to do them in secret.” Expect the CDA to slow the pace of transferring power to a crawl, know that it will not give up its Rs35 billion budget willingly and do not think it will be transparent about any of this.

A couple of notifications from an impermanent prime minister are not going to change the credo of the permanent bureaucracy. If this is the fight it will take to wrest away power, Waseem Akhtar may prefer to while away the hours in jail.

The writer is a journalist based in Karachi.