A feminist - inside out

You
By Erum Noor Muzaffar

This week You! exclusively talks to Sabyn Javeri, a promising writer, about her debut novel - ‘Nobody Killed Her’... the only book by a Pakistani author in the fiction category to make it to Huffington Post’s most anticipated list of the year 2017...

This week You! exclusively talks to Sabyn Javeri, a promising writer, about her debut novel - ‘Nobody Killed Her’... the only book by a Pakistani author in the fiction category to make it to Huffington Post’s most anticipated list of the year 2017... 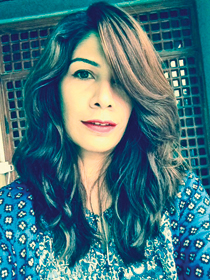 Sabyn Javeri is an acclaimed short story writer and has won the Oxonian Review Short Story award in the past. Sabyn moved back to Pakistan about two years ago after living 16 years abroad. She currently teaches at Habib University and lives in Karachi with her two children, husband, mother and a cat. Sabyn holds a Masters degree from the University of Oxford and has a PhD from the University of Leicester. Her short stories have been published in literary journals such as The South Asian Review, The London Magazine, The Oxonian Review, Wasafiri, Trespass, Bengal Lights, Sugar Mule and in award winning anthologies.

About her writing, Sabyn says, “The world is not black and white and I don’t see a reason why my fictional worlds must be written as such, so I seek inspiration from my surroundings and fuse it with my imagination. I write a range of genres including mystery, suspense, romance, literary fiction, and children’s stories.” Her other passion is painting and cooking. In an exclusive interview with You! Sabyn Javeri talks about her debut novel - ‘Nobody Killed Her’...

You! What motivated you to come up with your debut novel?

Sabyn Javeri: What motivated me was the idea of having ‘fun’. I wanted to create a kick-ass female character who broke all the stereotypes of a good submissive girl from the subcontinent. I wanted to write about an ‘Unsuitable girl’!

You! Who was your inspiration for writing your book?

S.J: My novel has two main female characters. One is Rani who is loosely inspired by strong empowered women like Benazir Bhutto, Perween Rehman and Aung San Suu who really fought for their beliefs. The other main character is Nazo, who embodies the controversial side of power. In her case, I wanted to create an anti-heroine who rose from the ashes like Mayawati, was dangerous and cunning like the Palestinian terrorist/liberator Leila Khalid, and had Jayalalita’s beauty and ruthless ambition. I wanted to create strong unapologetic female characters who made very different choices than was expected of them. I really wanted to challenge that whole stereotype of a ‘good girl’.

You! Why did you choose writing in English?

S.J: Unfortunately, although we are no longer under colonial rule, the legacy of the ‘English’ language continues to rule us. As a child I was sent to an English medium school, encouraged to read English literature, apply for scholarships to the ultimate English abode of higher learning, Oxford University. And therefore a time came when English became the language I thought in, spoke in, even dreamt in. It felt most natural to write in English. But now that I’m older I am making a conscious effort to untangle myself from the slavery of the English language, I hope to write in Urdu someday.

But I must add that one of the advantages of writing in English is that you can reach a far wider audience as it is a global language. Also it is a language that is constantly growing. Today English has many words from the subcontinent, that have become part of everyday speech such as loot, banglow, avatar. So in a way English belongs to us as much as we belong to English.

You! What’s the basic idea of ‘Nobody killed her’?

S.J: ‘Nobody Killed Her’ is a fast paced political thriller. The basic plot is a court trial centring around the assassination of a female Muslim leader, Rani Shah. The suspect on trial is Nazo Khan, Shah’s assistant who was sitting next to her during the blast but escaped unhurt. As the trial takes place we learn about other people in the murdered politician’s life, such as the ruthless army Major, the scheming Secret Services, the blood-thirsty Jihadists, an old journalist friend and of course her corrupt husband. It is up to the reader to decide who the real murderer is.

You! Can you tell us a bit about your book?

S.J: My book is a work of fiction. It is not based on any one person’s life story. Instead it is an amalgamation of many lives. The book’s narrator is Nazo, a girl from an under-privileged background who is ambitious enough not to let anyone or anything stand in her way. It is from her eyes that we see Rani Shah, a character in whom I have infused aspects of world leaders like Indira Ghandi for being the daughter of Nehru and carrying with her the automatic burden of a political legacy, Benazir Bhutto for being perhaps the only leader who was fabulously unapologetic about her family life while in office, Aung San Suu for her perseverance during exile and also her tactile negotiations with the military in reviving democracy; Margaret Thatcher for her transition from politician to autocrat...

You! Can you tell us how long did it take to finish your book?

S.J: I started writing it in 2011 soon after my second child was born and I was at home on maternity leave. Then I abandoned the idea when I went back to work six months later. However, a publisher who had enjoyed reading it online contacted me and asked me to send them the full manuscript. It took me three weeks to finish the rest of it.

You! How have readers received your work so far?

S.J: Surprisingly well. It is getting a lot of good press. It was the only book by a Pakistani author in the fiction category to make it to Huffington Post’s most anticipated list of the year which was shocking! Especially as big names like Omar Shahid, Nadeem Aslam and HM Naqvi have also released books this year.

You!  What’s your biggest accomplishment to-date?

S.J: I think every accomplishment, big or small, is important and a defining moment in one’s life. Having said that, completing my doctorate, teaching, managing to raise two little human beings and writing a novel while being a wife and mother seem like an accomplishment to me.

You! In your opinion, what are the challenges being faced by the women of today?

S.J: We try to do too much. Women these days are expected to be working mums, successful at office, perfect at home, fabulous mothers, as well as, dutiful wives and daughters. Women are killing themselves multi-tasking while men are supposed to be just providers. The roles of women have evolved outside the home but the roles of men haven’t evolved at all inside the house. A woman comes home and dons an apron while a man comes home from work and expects to be served.

You! What’s the most important advice you can give to women?

You! What do you think are the main ingredients or traits essential to attain success?

You! Your philosophy of life:

You! Any lessons learnt the hard way?

S.J: Is there any other way? One thing I have learnt is to cut out toxic people from my life. Life is too short to waste caring what others think of you.

You! Are you considering writing any other novel or book?

S.J: Yes, I have a book of short stories coming out next year called ‘Hijabistan’. It is about life behind the veil but not a physical one like a garment but the veil as a metaphor; woh pardah jo logo ki aqal per para hai.

You! What is your favourite subject which is close to your heart?

S.J:  Gender equality. We are a strange nation where women are revered yet not respected. India with its female deities who are worshipped, yet women on the ground are raped and ridiculed, faces a similar dilemma. I’m a feminist inside out and it burns me up when I see women being treated badly.

You! Do you think we can change established mindsets through writing?

S.J:  Yes, I think we can. Literature and art are as important as politics and governance in any society.

You! Why do you write?

S.J: I write because I want to and I can. In the sense that I have something to say which I can say in an entertaining way without sermonizing.

You! How do you unwind?

S.J: With a cup of piping hot, elaichi chai and ‘Eastenders’...

You! What is your ultimate desire?

S.J: A chocolate fudge cake that makes you lose weight.

You! Do you think there is place for new writers in today’s techno world? Are people still interested in reading and buying books?

S.J: The same can be said about religion, marriage, schooling or anything else that has been affected by modernity and instant access to technology. These days we can Google facts in an instant, so why go to school? We can watch shows on YouTube so why is television production still thriving? We have whatsapp so why is telecom still alive?  It’s because these things are constants in our lives. I don’t think a touch screen can ever replace the smell of paper, the sound of turning a page or the delicious warmth that comes from holding a good book in your hand!

You! Anything you would like to say to our readers:

S.J: A question I’ve been asked recently is that, “Why, being a woman you have chosen to write a ‘thriller’?” as if even genres were controlled by men. I think too often we women create invisible boundaries to hold ourselves in. Much too often we construct our own glass ceilings. My request to all you bright and wonderful ladies is not to limit yourself, certainly not just because you are a woman. Go out there and try new things. I mean just look at our women’s cricket team...they have taught our men’s team how to ‘play like a girl’!

* Nobody Killed Her is published by Harper Collins, Fourth Estate and is available at Liberty Books Stores all over Pakistan and South Asia.