Death toll climbs to 61 in suicide blast at Shikarpur imambargah 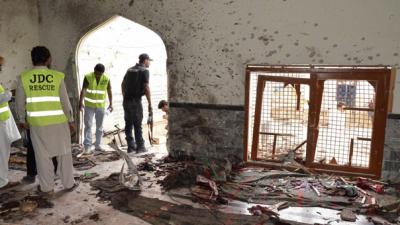 SHIKARPUR: The death toll in the suicide blast inside Imambargah Maula Karballa in Lakhi Dar area of Shikarpur climbed to 61 on Saturday after several more of the injured succumbed to wounds in hospital, officials said.

Sources said that 39 people were injured in the incident.

SSP CID Raja Umar Khattab said on Saturday that about six kilos of explosive material was used in the suicide blast.

On Friday, scores of worshipers were present inside the imambargah for Friday prayers during the time of the blast.

According to ISPR, a team of doctors was dispatched to Shikarpur from Pano Aqil Garrison.

Police and rescue services were dispatched immediately to the blast site while the injured were being taken to Civil Hospital Shikarpur.

According to rescue services sources, the roof of the Imambargah collapsed after the blast.

The Majlis-e-Wahdat-e-Muslimeen (MWM) and Shia Ulema Council announced a peaceful protest strike for Saturday and a three-day mourning to denounce the brutal incident.

Sindh Information Minister Sharjeel Inam Memon said that emergency had been declared at all hospitals in Shikarpur.

He also said that Sindh CM and Sindh Health Minister Jam Mehtab Daher had taken notice of the incident.

Aviation minister quashes rumours of resignation, says no one should be held accountable till inquiry is complete