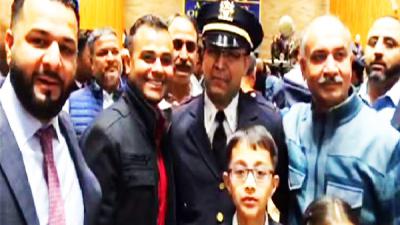 NEW YORK: For the first time in New York's police history, a Pakistani-American, Waheed Akhtar has been appointed as Captain in New York Police Department (NYPD).

A native of Mandi Bahauddin in Pakistan, Akhtar, married since 15 years and father of four, migrated to the US in 1998 and joined the NYPD in January 2005.

He served in Transit District 34 as a Police Officer and in October 2010 was promoted to Sergeant. He served in this supervisory position in the 77 Pct. and the Internal Affairs Bureau.

Akhtar then proceeded to the rank of Lieutenant and served in the 83 Pct and is currently assigned to Organized Crime Control Bureau.

Following is the Statement from Waheed Akhtar’s fellow officers and friends in NYPD:

"We are proud to congratulate our member Lt. Waheed Akhter on his promotion and being the first Pakistani -American Police Captain in the NYPD. He contributes his time to our ‘desi’ society and has served as a trustee in the past. He has a lot of experience and is very motivating which is an asset to our members. He is a great role model for our future. We look forward to working with our new executive and his continued support to our members and society."