Major portion of NAP yet to be implemented: PM 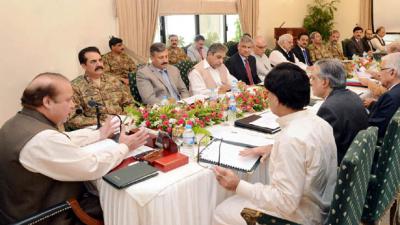 ISLAMABAD: Prime Minister Nawaz Sharif on Thursday said that provincial administrations had yet to implement a major portion of the National Action Plan to counter terrorism and extremism in the country.

"The top hierarchy of the country is present here from both the army and civilian sides. And I believe that there should be a conclusion to this meeting and that it should be result-oriented.

"We have spoken at length on this subject before, and there has been greater progress in some province and lesser in another, while there has been no progress at all in some province as well. It is very important that progress is equal everywhere," he told the high-level meeting also attended by Chief of the Army Staff (COAS) General Raheel Sharif, heads of all intelligence agencies, all four provincial chief ministers, chief secretaries and the leadership of Gilgit-Baltistan and Azad Jammu and Kashmir (AJK), and federal ministers.

"What impediments do you face? And what are the steps needed to be taken immediately by which the National Action Plan can be strictly and quickly implemented?" he asked those attending the meeting.

"Some part of the National Action Plan has been implemented, but there has been progress on a large part of it."

Implementation is necessary on each and every aspect of the anti-terrorism plan, said the prime minister.

Earlier, sources said that several policy drafts on key issues were presented before the civil-military leadership during the meeting.

According to sources, among the drafts presented was a policy to streamline issuance of visas to foreign students in local seminaries, and a detailed policy prepared by the interior ministry over private security companies working inside Pakistan.

The interior minister had prepared rules and regulations for International Non-governmental Organisations (INGOs) and local NGOs, which was also tabled during the meeting.

Among other matters discussed was a policy draft over arms licenses and guidelines for the import of bullet-proof vehicles and bullet-proofing of vehicles inside Pakistan.

Prior to the session chaired by the prime minister, the first round of the meeting was presided over by Federal Interior Minister Chaudhry Nisar Ali Khan in which he briefed members on the internal security situation and the progress of the National Action Plan so far.