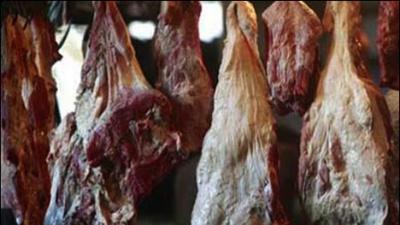 Kashif Jalil, in-charge Live Stock, told media that the Health Department’s drive against the elements involved in the business of substandard meat is underway during which three raids were carried out today (Thursday).

He said 200 kg substandard meat was seized in a raid conducted in Thokar Niaz Baig area of the city, arresting two people.

He said seven people were taken into custody after 250 kg substandard meat was found in their possession in Gojarpura.

A team of Department of Live Stock seized huge quantity of meat of dead animals in Shekhupura, arresting three people.
The meat was being transported to Gujranwala from Lahore when the raid took place.

Moreover, as many as six butchers were arrested as District Administration seized 40 maunds of substandard meat during a raid at a slaughter house.

Assistant Commissioner Abdullah Khurram Niazi said the decaying meat was disposed of in a canal.