Terrorists have no option but to surrender or die: IG FC 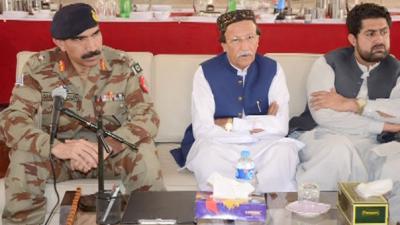 QUETTA: Inspector-General Frontier Corps Maj-Gen Sher Afgan claimed Friday that India was carrying out terrorist activities in Pakistan through Balochistan, where border areas are being used to supply weapons to terrorists.

He said that the Afghan border was also being used to support insurgent movements.

Addressing tribal elders in Noushki, Maj-Gen Afgan said that terrorists had no third option but to either surrender or die.

He said that those giving up arms would be facilitated and every effort made for them to be brought into the national mainstream.

The Inspector-General FC said that a handful of terrorists cannot defeat the entire nation. The fight against terrorism is not that of just the Army or Frontier Corps but of all of us, he said, adding that Pakistan's future is connected to the welfare of Balochistan.

The IGFC earlier visited Noushki, Dalbandin and Taftan, where he inaugurated a hotel.

In Quetta jalsa, PDM lashes out at PM Imran Khan, says govt's end is near