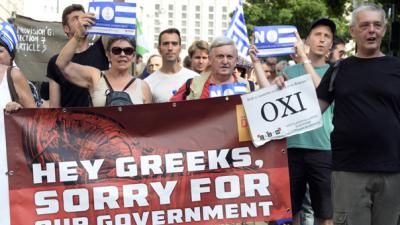 ATHENS: Greece´s Prime Minister Alexis Tsipras got a rock-star welcome at an Athens rally late Friday as he sought to revive support for a "No" vote in a referendum called to bolster his stance in his struggle with international creditors.

His typically charismatic turn on the stage came as the latest polls suggested that Sunday´s plebiscite was too close to call, with his EU nation of 11 million people evenly divided.

Countering EU leaders´ warnings that a "No" could cause Greece to crash out of the eurozone, Tsipras told the crowd of 25,000 cheering supporters: "We are not simply deciding to remain in Europe -- we are deciding to live with dignity in Europe.

"I call on you to say ´No´ to ultimatums and to turn your back on those who would terrorise you," the 40-year-old leader said. "No one can ignore this passion and optimism."

Just 800 metres (yards) away, separated by police with riot shields, a rival rally of 20,000 "Yes" supporters shouted pro-European slogans and voiced fears of a so-called Grexit if Tsipras got his way.

"They cannot pretend any longer that it´s not about leaving the euro," said a 43-year-old doctor who gave his first name as Nikos. "And outside the euro lies only misery."

"It cannot go on like this. Our government is a liability," said George Koptopoulos, a 70-year-old retired university professor.

Many Greeks are jumping into the "Yes" camp because of a heightened sense of crisis brought on by capital controls this week that limit their daily ATM withdrawals to just 60 euros ($67).

Adding to that, a eurozone emergency fund officially declared Greece to be in default on Friday for not paying a 1.5-billion loan instalment to the International Monetary Fund loan earlier this week.

The European Financial Stability Facility (EFSF), Greece´s single biggest creditor, said however it was not yet demanding immediate repayment of its loans worth 145 billion euros ($160 billion).

The two latest voter intention polls showed growing support for a "Yes" compared to previous surveys.
An Alco institute poll Friday found 44.8 percent of Greeks intend to vote "Yes" and 43.4 percent are for "No".

A Bloomberg survey for Greece´s Macedonia University showed 43 percent would vote "No" and 42.5 percent "Yes".

Greece´s top administrative court ruled late Friday the referendum could go ahead after rejecting a challenge by two citizens who argued its question was confusing and unconstitutional.

Tsipras argues the referendum is needed to force creditors to finally accept his key demand of another round of debt relief.

Greece, he says, needs to trim its suffocating 323-billion-euro debt burden by having creditors forgive 30 percent of what they are owed and allowing a 20-year grace period for repaying the rest.

Greek Finance Minister Yanis Varoufakis has promised that banks would reopen on Tuesday of next week after a quick new deal agreement. The Union of Greek Banks said Friday its members had enough liquidity until then.

European Commission chief Jean-Claude Juncker warned in Brussels however that Greece´s negotiating position, far from being strengthened, would be "dramatically weakened" in the event of a "No".

Even if the "Yes" vote wins, there would still be "difficult" negotiations ahead, he added.

The cash rationing in Greece has led many to despair, especially pensioners who have been allowed a one-off over-the-counter withdrawal of 120 euros if they don´t have a bank card.

In Greece´s second-biggest city of Thessaloniki, one 77-year-old man unable to withdraw his 120 euros crumpled to the ground, scattering his papers.

"I am a sensitive person," the man, George Chatzifotiadi, explained later to AFP. "I cannot stand to see my country in this situation."

He added: "Europe and Greece have made mistakes. We must find a solution."

In Athens, another pensioner, Kostas, was regularly withdrawing his and wife´s daily euro limits from ATMs for fear they might be seized by the government or converted to drachmas. "My money is safer at home," he said.

Many cash machines were running short of denominations, allowing only the withdrawal of a 50-euro note.

The referendum question being put to Greek voters has stumped many.

The question reads: "Should the deal draft that was put forward by the European Commission, the European Central Bank and the International Monetary Fund in the Eurogroup of June 25, 2015, and consists of two parts, that together form a unified proposal, be accepted?

The first document is titled ´Reforms for the Completion of the Current Programme and Beyond´ and the second ´Preliminary Debt Sustainability Analysis´."

Eurozone officials have firmly said that the "deal" referred to expired on Tuesday.

Europe´s main stock markets slipped lower Friday as all eyes turned to Greece´s referendum and what that might mean to investors at the beginning of next week. The risk of contagion to other eurozone nations, however, appeared remote.

An emerging consensus among analysts was that, either way, the referendum´s result would likely not change that much.

Afterwards, "we might well see the Greek government and its creditors simply resume their all too familiar and intractable stand-off," investment company BNY Mellon said in an investor note.

"Even if Sunday´s referendum delivers a ´Yes´ vote, the challenges to finding a solution that will preserve Greece´s euro membership are substantial," the Oxford Economics analysis firm said.

Holger Schmieding, chief economist at Germany´s Berenberg bank, said: "A Greek ´No´ could turn into a tragedy for Greece -- but it would not be a significant threat for the eurozone as a whole."