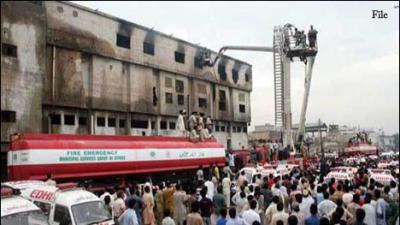 KARACHI: The Joint Investigation Team, formed to probe into Baldia Town factory fire, has written a letter to higher officials of Federal Investigation Agency and police for bringing factory owners back home from abroad.

The sources said factory owners Abdul Aziz, Shahid Baila and Arshad Baila have been living abroad along with their families over the past four months as a result no progress is made in the investigation.

According to the investigation officials, the factory owners were sent messages to come back but the JIT team was not answered.

The officials claim that without interrogation from the factory owners, JIT report could not be finalized.

Over 250 people were killed in Baldia town factory inferno in 2012.