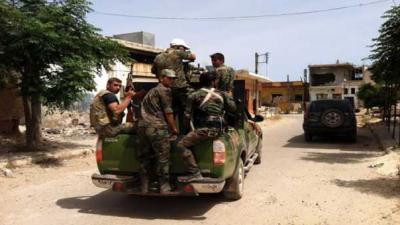 Beirut: Rebels on Friday overran a hospital in northwest Syria where at least 150 regime forces and dozens of civilians were trapped for nearly a month, a monitor said.

Al-Nusra Front, which is Al-Qaeda´s affiliate in Syria, and other factions "have taken complete control of Jisr al-Shughur hospital," said Rami Abdel Rahman, who heads the Syrian Observatory for Human Rights.

The monitoring group´s head said "dozens" of people had managed to flee but others were killed, wounded or taken hostage, without giving exact figures.

The end of the siege came as rebels were subjected to heavy shelling by the army, the Observatory said.

Earlier this month, Syrian President Bashar al-Assad had pledged to free the besieged forces, saying his "army will arrive soon to these heroes trapped in the Jisr al-Shughur hospital."

The regime and Al-Nusra Front gave differing accounts of the end of the siege.

"The heroes defending Jisr al-Shughur hospital were reunited with their comrades," it said.

Al-Nusra on its official Twitter account posted pictures of a line of soldiers apparently exiting the destroyed hospital amid plumes of smoke.
Regime soldiers had "left dejected from the intensity of the siege", it said.

The hospital complex is in the southwest of the town in Idlib province that rebels seized on April 25.

At least 150 regime forces and dozens of civilians, including families and government bureaucrats, had since remained trapped in the hospital.
Rebel groups have made a series of major gains in Idlib province, including its capital city of the same name that they seized on March 28.

And on Tuesday, rebels took control of Al-Mastumah, the regime´s largest military base in the province. (AFP)

Oman expats to now only be allowed select jobs