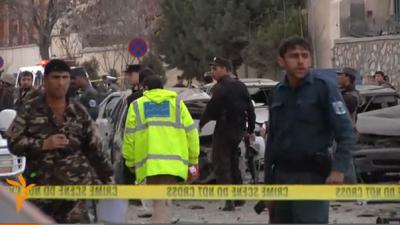 KABUL: A suicide attacker killed at least seven people after detonating a car bomb near a district police headquarters in the centre of the Afghan capital Kabul Wednesday, officials said.

The powerful blast went off in Muradkhani district close to the presidential palace, the defence ministry and the ministry of finance.

"The initial reports from Kabul hospitals show seven killed and 22 wounded including women and children," Sayed Kabir Amiri, the head of hospitals in the capital, told AFP.

There was no immediate claim of responsibility for the attack.

Captain Tom Moore to be knighted by Queen Eilzabeth

Taliban should enter ceasefire, intra-Afghan talks need to be sped up: NATO