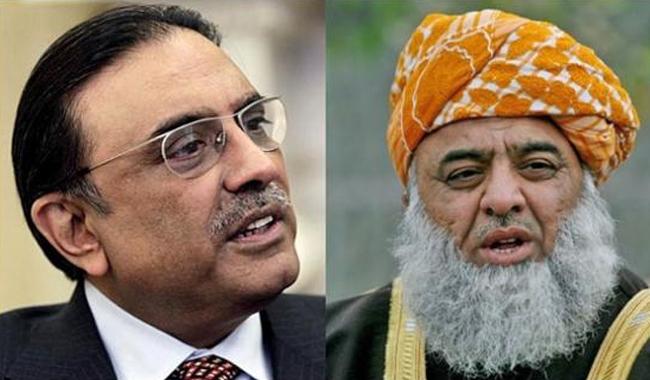 Sources disclosed that the meeting between Fazlur Rehman and Asif Zardari lasted for as many as three hours. During the meeting, the JUI-F chief advised Asif Zardari to form a consensus with the government on all controversial issues. Fazlur Rehman stated that Panama leaks should be investigated but specific persons should not be targeted.

During the meeting, which was held at the PPP leader's Park Lane residence, Zardari reassured the JUI-F chief that he would not fall for any conspiracy against democracy. Zardari reportedly also said that he would not become a victim of those conspirators who looked for a shortcut to come into power.

However, even after Maulana Fazlur Rehman's insistence, no final decision was reached regarding a meeting between Prime Minister Nawaz Sharif and Asif Ali Zardari.

Prime Minister Nawaz Sharif is also in London for a couple of days for a medical checkup. The Pakistani Prime Minister is facing immense pressure from opposition parties who have all jointly called for PM Nawaz to step down in light of the disclosures of the Panama papers and obtain a clean chit from the judicial commission.