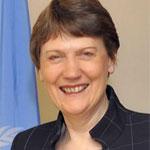 The fight for women’s health

Over the last year, as the global movement for women’s equality and gender parity gained momentum, we saw a sea change around the world. Women have demanded their right to work safely, be paid fairly and live without fear of harassment and harm. This movement has been a long time coming. But it is only the beginning.

As women (and men) continue to advocate for change from #MeToo to #TimesUp and beyond, we must make sure that our vision includes uplifting women from all backgrounds across the world.

The fundamental building block of a girl’s life, whether in Botswana or Baltimore, is her health. Before a young girl in Pakistan can run a company or a country, she needs an equal chance at living a healthy life. Most girls never get that opportunity. That is why investing in women’s health around the world from birth to adolescence is both the right thing to do and comes with a huge economic dividend.

Fighting for women’s health equality isn’t an abstract slogan; it is the keystone of women’s equality. It also provides the most immediate opportunity to ‘press for progress’ -- this year’s theme of International Women’s Day.

The Millennium Development Goals did help accelerate progress. However, there is still a lot more work to do. Every day, 830 mothers die in childbirth. Many of them literally bleed out at the roadside, unable to get to a hospital to get the services they need.

Unfortunately, women are dying from largely preventable or treatable complications. Adolescent girls are at a heightened risk of complications at birth. And yet, an estimated 16 million girls give birth every year. Many countries have failed to realise the commitments enshrined in the UN Convention on the Rights of Child, which prohibits marriage under the age of 18. Woefully, at least 214 million women are still unable to access family planning services that would allow them to control when they have children.

Ending child marriage and ensuring girls are educated has multiple benefits. Educated girls grow up with the skills and experience needed to make their own choices; get better jobs; have children later; and tend to space their pregnancies to suit their needs. They can lift themselves and their families out of poverty.

Women’s health often focuses only on their reproductive capacity. However, the biggest killers of men and women are now noncommunicable diseases (NCDs), such as cancer, diabetes as well as lung and heart disease. Two-thirds of deaths among women are caused by NCDs, violence and injuries. And yet, the myth that these killer diseases are mainly the domain of men persists despite evidence that suggests otherwise.

Overweight and obesity is the gateway disorder driving much of the NCD crisis. The near-double rates for women in their twenties and thirties are worrying since it is not just maternal undernutrition but also over-nutrition that undermines human capital development -- the strongest indicator of the success of nations in this digital age. In fact, so significant is its interplay that the borrowing costs of countries are likely to be affected by their human capital rankings by 2025.

Maternal malnutrition has far-reaching consequences for human capital development. Women who are themselves stunted in childhood tend to have stunted offspring, creating an intergenerational cycle of poverty and reduced human capital. Malnutrition in the womb also increases the risk of adult obesity and NCDs. Therefore, many developing countries have a double malnutrition burden, with obesity coexisting alongside under-nutrition and stunting.

Gender differences in obesity and under-nutrition rates reflect the underlying gender inequality and socio-economic factors. Where female empowerment and workforce participation isn’t the norm, women are more likely to be obese. Gender inequality in society swings the pendulum of the nutritional status towards both excess female obesity and under-nutrition among women and children while greater gender equality resets the balance and favours human capital.

Gender inequality is not only a barrier for prosperity and economic growth, but also has a strong correlation with poor social outcomes. Addressing gender inequality is, therefore, critical for human capital development. Supporting and improving the education of girls; enabling women to access credit and land; and promoting the political rights of women along with their participation in economic life are potentially vital underlying interventions to address the human capital development challenge.

Over the last year, the global women’s movement has successfully taken on entrenched patriarchal and hierarchical systems to address these challenges. On this International Women’s Day, it is time to drive a women’s health revolution that saves lives and improves social and economic outcomes.

Helen Clark is the former prime minister of New Zealand and former administrator of UNDP. Dr Sania Nishtar is co-chair of a High-Level Global Commission on NCDs, the founder of Heartfile and a former federal minister.