“Violence, blood, and gore became normal to look at and I became immune to watching others die. You could almost call me a sadist because I think I actually began to enjoy inflicting pain upon others.

“Violence, blood, and gore became normal to look at and I became immune to watching others die. You could almost call me a sadist because I think I actually began to enjoy inflicting pain upon others. There were times I even felt like I wanted to kill those that made me angry, just as the terrorists had slaughtered my brother.” - Muneeb Khan 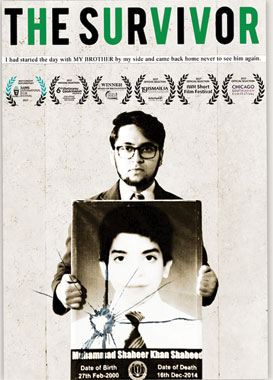 Muneeb Khan lost his brother, Shaheer, in a horrific incident that occurred in Peshawar, Pakistan on December 16, 2014. On this fateful day, the Taliban attacked the Army Public School and killed over 130 children. Those not affected have put the tragedy aside, but Muneeb still suffers from PTSD and his family continues to feel the loss of their son. The Survivor, by Danial Afzal, is a fascinating short documentary that follows Muneeb’s inner turmoil and drive to find his purpose.

The film begins with gunshots and statistics from the day of the incident. A Google search shows images of death and blood. The mother of the deceased brother, Shagufta, recalls to the audience how she felt seeing Muneeb return home after the attack. Interviews with the two sisters echo Shagufta’s gloom. The Taliban has left their mark on Peshawar.

Muneeb’s survivor’s guilt is apparent through the narrative as he remembers his emotional state during the massacre. Seeing his friends bleed out and die in front of him has left vivid marks on his mind. Dr. Mowadat, a psychiatrist and professor, talks about the daily struggle those with PTSD go through to battle their own demons and how to help heal the victims of trauma.

If the weeping of the family and the murder of the children doesn’t impact audiences, Afzal’s score will jog emotion in viewers. The choice of music brings all the pieces of the film together and makes the documentary relatable to viewers; music itself has the power to generate a sense of empathy in audiences.

Growing up in a country surrounded by violence and terrorist acts, Khan aspires to follow his dreams by creating video games that help kids with PTSD deal better with their inner demons. He hopes to combat this issue in the youth of Pakistan through his art. Muneeb states in the film that by realizing his passion to change the minds of traumatized kids, he is “giving honor to his late brother’s memory.”

The entire story is told in the form of a personal statement, as Afzal and team aim to potentially acquire scholarships and financial aid to fund Khan’s degree programme. The director’s and producer’s’ end goal is to help Muneeb gain admission into a game design programme, and they hope his vision and his story touches the hearts of numerous university officials.

This film has won Best Concept Documentary at the FiLUMS Festival in Lahore, Pakistan, premiered at the Ismailia Film Festival in Cairo, Egypt, the International Children’s Rights Festival in Bursa, Turkey, won an Award of Recognition at the Impact DOC Awards in California, U.S., and has been shortlisted to premiere at the IWM Shorts in London, England and the Chicago South Asian Film Festival in Illinois, U.S. Afzal hopes the story takes off worldwide, and eventually leads to Khan’s prosperity. Ultimately, The SurvivorÊwas a sensational success. The makers of The Survivor hope to inspire social change within the nation.

In conversation with Hadi bin Arshad

Exhibition: a glimpse into artists’ mind