One of the 12 films that were made under Zee Network’s Zeal for Unity initiative, which brought 12 filmmakers (six each from both Pakistan and India) on a common platform, Laloo Lal dot Com was recently screened at T2F in Karachi.

Khalid Ahmed’s submission to Zeal for Unity, Laloo Lal dot Com was recently screened at T2F amidst much appreciation and talks of a possible release in Pakistan.

One of the 12 films that were made under Zee Network’s Zeal for Unity initiative, which brought 12 filmmakers (six each from both Pakistan and India) on a common platform, Laloo Lal dot Com was recently screened at T2F in Karachi.

Directed by Khalid Ahmed, the film stars Faysal Qureshi in the titular role (Laloo Lal) and incidentally it also brought Qureshi back to the big screen after over 10 years.

Set in a small village in Thar, Laloo Lal dot Com tackles the themes of love, loss and betrayal. It follows the story of Laloo Lal, the only man in the village who has learnt the English language and someone whom everybody counts on. His family includes a visually impaired mother, Mai (played by Shabbira Channa) and his fiancee Chandan (played by TV and theatre actress Aimen Tariq), who looks after the home chores.

Laloo Lal is a dignified man and believes in following certain principles that he has set for himself. However, there comes a twist in his life when he meets an English woman, Sue (played by Australian actress Natasha Portess), who comes to the village in search of her missing husband. What follows is a chain of unprecedented events that take place in Laloo Lal’s life as he embarks on a journey to find her husband. 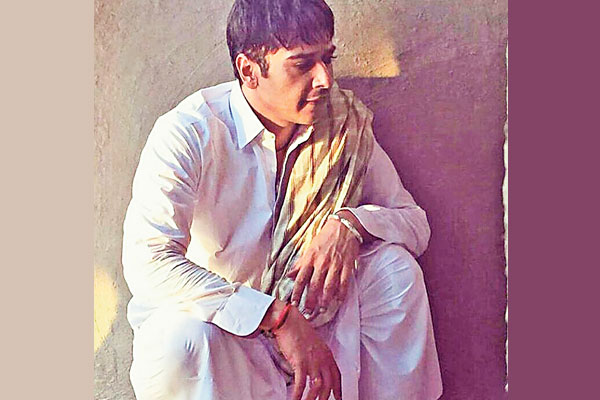 Faysal Qureshi, who essays the titular character of Laloo Lal, returns to the big screen after several years.

Though the plot is male-centric and revolves around the life of Laloo Lal, it manages to break the stereotype that women are weak compared to men. All three women in the film - Mai (his mother), Chandan (his fiancee) and Sue (the English woman) - turn out to be stronger than the male protagonist despite the fact that most of them come from a conservative background. While Chandan supports Laloo Lal in all his endeavors and never shows her weakness, Mai hides her grief for years despite knowing that Laloo is lying to her. Sue, on the other hand, proves him wrong when he says on one occasion, “You can’t do this, you’re a woman and women are weak. We’re men, we’re strong.”

Laloo Lal dot Com is a unique cinematic experience with characters who are closer to reality and are flawed. Exploring the themes of love and betrayal, the 75 minute tale extends beyond a love story and highlights several other issues affecting the lives of these people.

Coming to the performances, both new and experienced actors have done justice to their roles and their portrayals are remarkable. Qureshi, who is known for his versatility, shines throughout the film and leaves a mark with his fabulous acting.

The film has been screened twice till date; it premiered at the 7th Jagran Film Festival alongside other Zeal for Unity films, earlier this year, and now at T2F in Karachi. According to the director, Khalid Ahmed, the film was well received on both the occasions and those in attendance even suggested that the film should be released in Pakistan.

“We’re planning to release the film in Pakistan as a lot of people suggested this to us after watching the film,” Khalid Ahmed told Instep. “There is room for all kinds of films to be screened on the big screen. Laloo Lal dot Com is an unusual film with an unusual story. I feel it’s gripping and therefore it deserves a chance to be viewed by a wider audience,” he concluded.