India does not understand the language of peace: Khawaja Asif 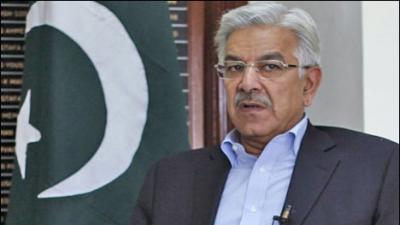 ISLAMABAD: Defence Minister Khawaja Asif on Saturday responded to the aggression by Indian forces along the Working Boundary that killed a 13-year-old girl, and said that it seemed like India did not understand the language of peace.

Speaking to reporters outside the Parliament House, he said that Pakistan was working hard trying to maintain peace since at least six months, but now it seemed India would have to be taught in their own language.

He said that, Indian Prime Minister Narendra Modi has made clear an expression of extremist attitude. He went on to say that in the past also, a lot of Muslim blood was shed at the hands of Modi, and even now innocent Muslim lives are being lost.

Asif furthersaid the issue of Indian aggressiveness was already raised on multiple forums, and now the government is considering to take up the issue with the United Nations.

'No policy determined yet': HEC in advisory for Pakistanis enrolled in Chinese universities