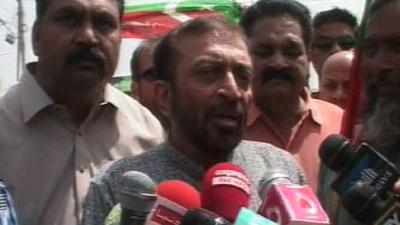 KARACHI: Senior leaders of the Muttahida Qaumi Movement (MQM) welcomed Pakistan Tehreek-e-Insaf (PTI) chairman Imran Khan and his wife as they arrived at the MQM's Karachi stronghold of Azizabad on Thursday.

Khan was leading the rally to the NA-246 constituency, where PTI candidate Imran Ismail will compete against the MQM for the upcoming by-election on April 23.

Speaking to reporters, MQM leader Farooq Sattar said that Imran Khan was visiting Azizabad after a long time, and that the MQM welcomes the PTI leader.

"We are thankful to Imran Khan for coming to the 'martyrs memorial' and paying his respects. I hope this mutual feeling of tolerance will continue as it will strengthen democracy," he said.

He said that MQM chief Altaf Hussain's statement had helped cool tensions between both parties, which have both fielded candidates to compete in the NA-246 by-poll.

"The electoral process gives us an opportunity to strengthen democracy. This is a victory for democracy," he said.

Sattar stressed that the two parties should not allow extremists to benefit from political rivalry.

MQM officials said they had prepared gifts for the PTI chairman and hiw wife — a Shalwar Kameez suit for Imran and a set of gold jewelry for Reham along with a bouquet of flowers.

However, Imran left shortly for Karimabad after paying his respects and offering fateha at Jinnah Ground, with the MQM unable to present the gifts to the PTI chairman.

Both parties have been fierce rivals in the recent past, and will both be competing for the Azizabad constituency, which holds symbolic value for the MQM as the home of its founder Altaf Hussain.