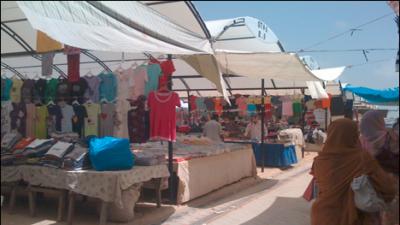 KARACHI: Asia’s largest open air Sunday market spread over approximately 30-acres has been razed by the Defence Housing Authority. The market which housed nearly 2500 stalls had been functioning under a 10-year agreement with DHA which ended in December 2014.

With parking facilities for 5000 cars, paved walkways and covered stalls, the Sunday Bazaar attracted shoppers from all walks of life. The market had something to offer everyone; from food stalls to fabrics, vegetables, electronics, comics, stationary, tools and hardware as well as the odd military gadgetry as well.

However with the agreement having expired on December 31st 2014 as well as the three month grace period, shoppers frequenting Sunday Bazaar will not have to find somewhere else to shop.

Sources have told Geo News that while some of the stall owners have identified alternate locations, is it unlikely that the Sunday Bazaar will be returning anytime soon.