A meetup for Harris Khalique’s Crimson Papers reveals its significance 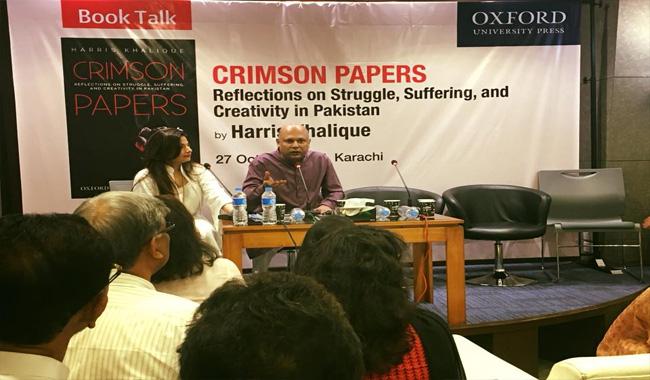 “Crimson Papers” is an elegantly crafted book that mainly reflects political, religious, cultural and social landscapes of Pakistan in a broader context with South Asia.

The book’s four intriguing chapters 'Blood', 'Sweat', 'Tears' and 'Ink' were briefly discussed in the conversation, that was witnessed by a jam-packed audience at the Oxford Bookshop. 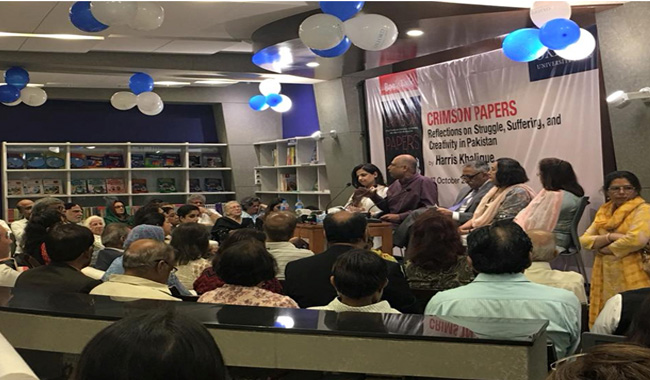 The first chapter of Crimson Papers titled “Blood” discusses the formation of Pakistan and break-up of Bangladesh, contiguously is an important conceptual contribution the book aims to make. it narrates the horrific bloodletting the two partitions brought about.

The Chapter entitled 'Sweat' is about the hard-working and diligent leftists, including Aizaz Nazeer and Ahmad Bashir with whom the author was familiar with.

Harris narrated the third chapter entitled “Tears” as a chronicle of the traumas of the victims who got affected for the mistakes they did not commit and decisions they did not make. “Within their stories there are more and more stories,” Khalique mentioned.

'Tears' narrates the stories of the mother of a young Hazara who was the victim of sectarian violence in Balochistan's capital; Shabana, the dancer from Swat who was murdered by the Taliban; Asia Bibi, the Christian woman who was jailed over blasphemy charges; and Sabeen Mahmud and Parveen Rehman, who lost their lives to conflicts to which they were not direct parties.

“This is about the people who are invisible and who are powerless,” he said.

The author dedicated the last chapter 'Ink' to art and poetry. Harris states that it is because of "art and creativity in Pakistan that hope refuses to sink in the deluge of sorrow."

Governor Sindh Mohammad Zubair was the chief guest during the discussion also shred his words.

“I always say that Pakistan was supposed to be a liberal and tolerant society but somehow it went completely the other way.”

“I am not a leftist and neither a rightist as most Pakistanis are,” he added.

The discussion focused the intellectual capacity in Pakistan, its changing political landscape, disconnect between different sections of the society, ethnic conflicts, extremism and persecution faced by the minorities, aiming at improving things for the betterment. 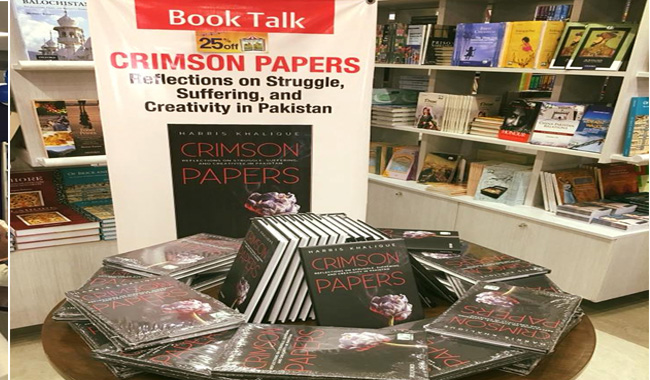 'Crimson Papers' is a must read, mainly because it weaves sociopolitical subjects in a literary style. The author of the book, Harris Khalique is a leading Urdu and English poet, columnist, essayist and the author of the book shed a light into his collection of creative essays that provide an understanding of the issues related to Pakistan.